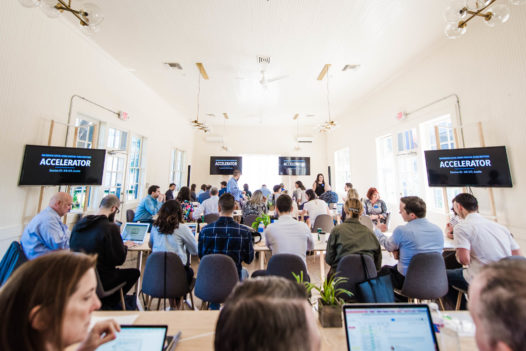 On May 8th and 9th, 42 executives from 14 metro news publishers came together in Austin for the second of three in-person events as part of The Facebook Journalism Project: Local News Subscriptions Accelerator. This pilot program, over the course of three months, focuses on helping metro newspapers take their digital subscription business to a new level.

The program kicked off in March at the Facebook New York offices, and focused on foundations like developing performance benchmarks and changing company culture to embrace consumer-revenue models as well as optimizing existing marketing channels, such as publishers’ websites and email newsletters.

The second in-person meeting focused on how to leverage Facebook and other external channels for discovery, engagement and conversion, how publishers can think about audience segmentation, and best practices from e-commerce.

Tim Griggs, an independent media consultant and former New York Times executive who developed the program curriculum, led the day with this key message for the Austin sessions: “Audience is infinitely more important than traffic.” Griggs stressed that understanding who your loyal audience is and turning them into lasting subscribers is a more difficult proposition, but more sustainable for the publishers in the room.

Griggs kicked off the day by asking participating publishers to share test results and lessons learned since the last time they got together in March. Many publishers talked about the value of being able to bounce ideas off others in the room, either during the events, or through their group Slack channels. Some updates shared included:

Yasmin Namini, one of the program coaches, and an independent digital media consultant and former Chief Consumer Officer at The New York Times, said after the first month and a half of the program: “The common theme is I’m impressed by all our teams. The level of sophistication is super impressive. We are all under-resourced, but to have a room full of so much passion for the mission, for the job, for the numbers, you’ll figure out the resources. When the idea is building lifetime value, you can make the business case for the resources you’ll need.”

Case Studies from Other Publishers and Ecommerce Sites 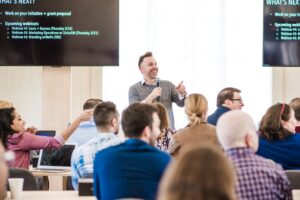 Included in the nine sessions over the two days were a number of case studies where leaders from other publishers shared tactics and strategies that have worked for them. Valentina Park, the global social media manager at Dow Jones, took the group through the various ways the Wall Street Journal transformed in the past couple years by building a sophisticated digital subscription acquisition strategy. “When advertising was doing really well, we, as an industry, forgot about the customer. We were talking about eyeballs and not people,” she says. In response, they diversified their business and have a flourishing membership model..

Griggs not only invited publishers to share their success stories, but he brought in several ecommerce sites to talk about how they leverage external channels to sell products or monthly subscriptions. Dollar Shave Club, a subscription service for mens’ grooming products, talked about the importance of captivating creative. And Saatva Mattress discussed how they learned more about their audience and doubled down on delivering relevant search advertising and content marketing to people with a high propensity to purchase.

To learn more about how Facebook can play a role in subscriber acquisition, a number of Facebook representatives were on hand to take questions and give presentations on various tools that might be relevant to members of the Accelerator. One session in particular discussed subscriptions and CTA (Call-To-Action) tools built into Instant Articles, the ways publishers can leverage the Facebook Pixel, and the types of specific audiences one can build in Facebook’s ads tools.

Jason Sylva, a former New York Times and Financial Times marketing executive, led a session on recent Facebook News Feed changes to promote meaningful social interactions, and what that might mean for publishers in the room.

The final session will be held in Menlo Park at the Facebook offices. Between now and then we’ll be sharing more best practices and case studies learned from these events. Look out for tips on how to gain subscribers through partnerships and other alternate methods, as well as tips on using the Facebook Pixel.