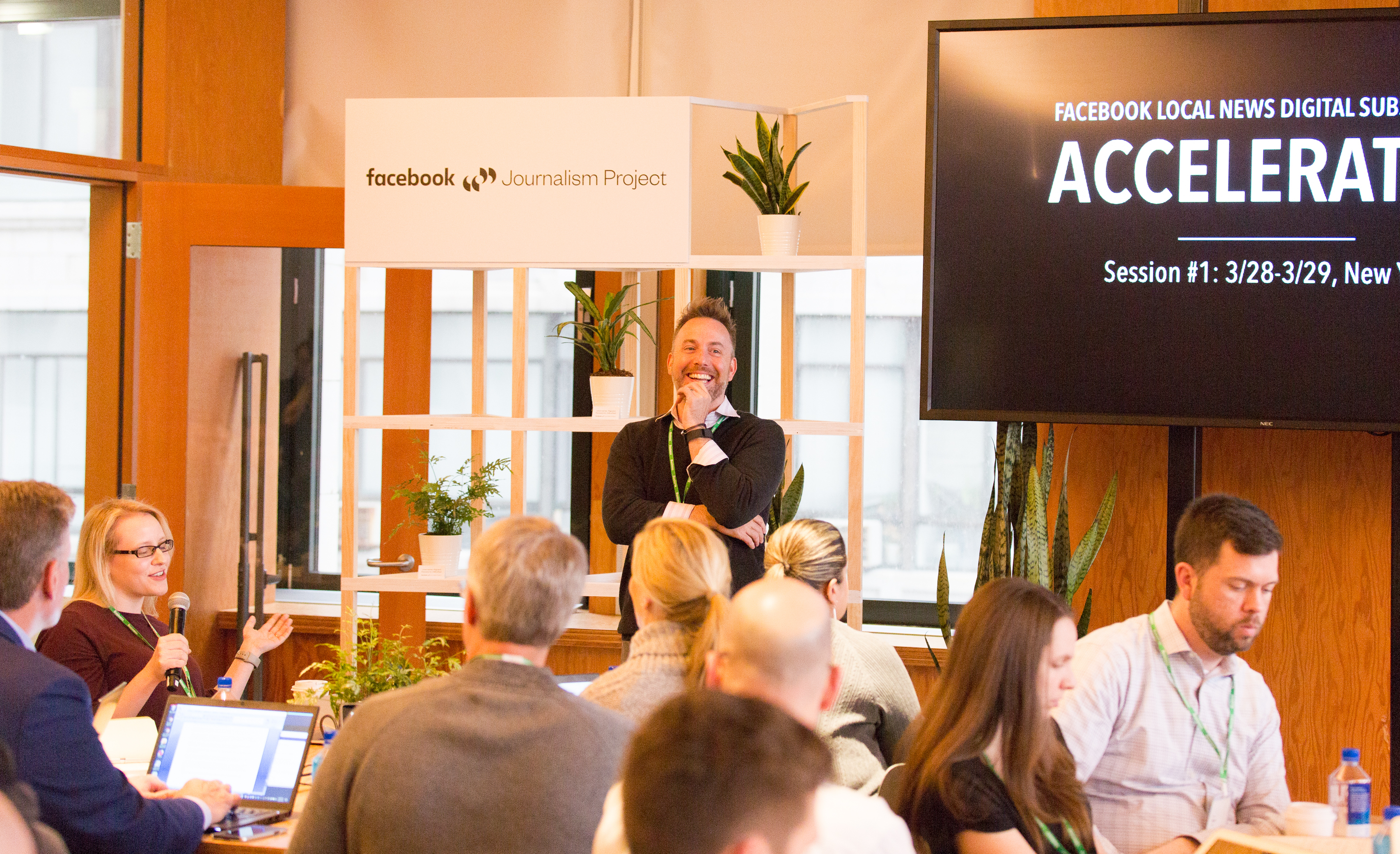 On March 28th and 29th, Facebook New York hosted 42 executives from 14 metro news publishers for the start of the The Facebook Journalism Project: Local News Subscriptions Accelerator, a pilot program, which includes hands-on workshops, a grantmaking program organized by The Lenfest Institute for Journalism, and regular reports authored by The Lenfest Institute and The Facebook Journalism Project.

Over the course of three months, the Accelerator will focus on helping metro newspapers take their digital subscription business to a new level.

Working with program coaches, publishers will then design individual projects that tackle their unique business needs. Grant funding will empower each publisher to implement solutions that help elevate their digital subscription business. We’ll be sharing learnings and case studies from the accelerator as they happen and publishers start putting their strategies into action.

“The meter is a tactic, not your strategy,” said Griggs in the session. “The meter is just one of many ways to segment your audience.”

The group dove into best practices for building and growing a digital subscription business, from how to build products that generate subscriptions, data benchmarking and optimizing owned marketing channels, to yes, “gateways” or “paywalls” and how to predict the likelihood that a casual reader will one day subscribe.

Ben French, Senior Vice President of Product at The New York Times, spoke about the importance of internal agreement on goals and intended audience as well as understanding the needs of that audience deeply to develop products for them. Cross-functional teams should then be created to deliver on these goals.

One of the program coaches, Yasmin Namini, an independent digital media consultant and former Chief Consumer Officer at The New York Times, spoke about transforming culture so that everyone is involved. It’s not simply for the consumer marketing department to figure out but for everyone to collaborate and participate — from encouraging the newsroom to think past page views to instilling a testing culture, one that is not afraid to try new things.

Other sessions included: understanding data and developing benchmarks from Matt Skibinski, a media consultant with The Lenfest Institute, data-driven optimization from Lin Gordon, Associate Director of Marketing Optimization at Hearst Newspapers Digital, and propensity modeling from the Stu Ward, who teaches Quantitative Technique at School of International and Public Affairs at Columbia University.

Participants in the program, which included digital marketing, audience development, newsroom, data and analytics and social media leads, come from publications with varied digital subscription model histories — from not yet launched to six months old to five years or more.

Yet, there were more similarities than differences. In sharing strategies and stories from the trenches with their peers, a few common challenges and themes emerged. One that came up throughout the day was galvanizing teams internally, from the top down, to embrace a digital consumer-revenue model.

“My biggest takeaway is [the idea of] team loyalty vs. department loyalty, so we can do what’s right for journalism and for our community,” said Ann Poe from Advance Local regarding creating sub-teams to develop subscription-driven products.

“Fail cheap,” said Jim Gorman from Philly.com about learnings from the first day. Teams may not always be able to move fast, but can try new things within a budget.

“It’s a mindset shift,” said Peter Doucette from The Boston Globe, a participant in the program as well as a guest speaker, sharing case studies from what the Globe has learned. “We believe our journalism is worth paying for and we may not have all the answers, but we experiment. And every day or every week we look at the numbers. We are committed to growth, every week for the long term.”

There will be two more in-person sessions in Austin, TX and at Facebook’s headquarters in Menlo Park, CA, in addition to webinars and one-on-one sessions with program coaches. Over the coming weeks we’ll be sharing more specific learnings from this event and the upcoming webinars. Look out for best practices on email marketing and landing pages.

42 executives from 14 metro newspapers convened for the first session of the Local News Subscription Accelerator.