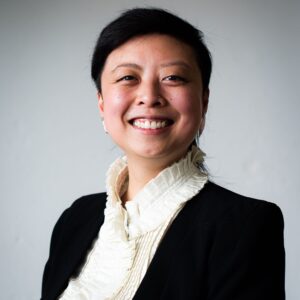 Diana Lu is the Director of the Knight-Lenfest Local News Transformation Fund.

She has spent more than ten years in the nonprofit, public, and media sectors working on economic development, placemaking, and resource redistribution. She is also the Community Engagement Editor for Root Quarterly, a Philadelphia-based print journal.

Previously she managed the Germantown Info Hub, a community-centered journalism project that shares information for and by Germantown residents, and served as the Community Engagement Editor for WHYY’s PlanPhilly. Prior to media, Diana worked in economic development as the Director of Partnerships and Outreach for Goldman Sachs 10,000 Small Businesses, a public-private initiative focused on strengthening businesses through revenue generation and local job creation.

Diana has lived and relied on public transit in Los Angeles, Chicago, Brooklyn, San Francisco, and Paris, but became a proud SEPTA rider in 2009. She holds a Masters in City Planning from the University of Pennsylvania Stuart Weitzman School of Design and a B.A. in Urban Studies and French from Vassar College.