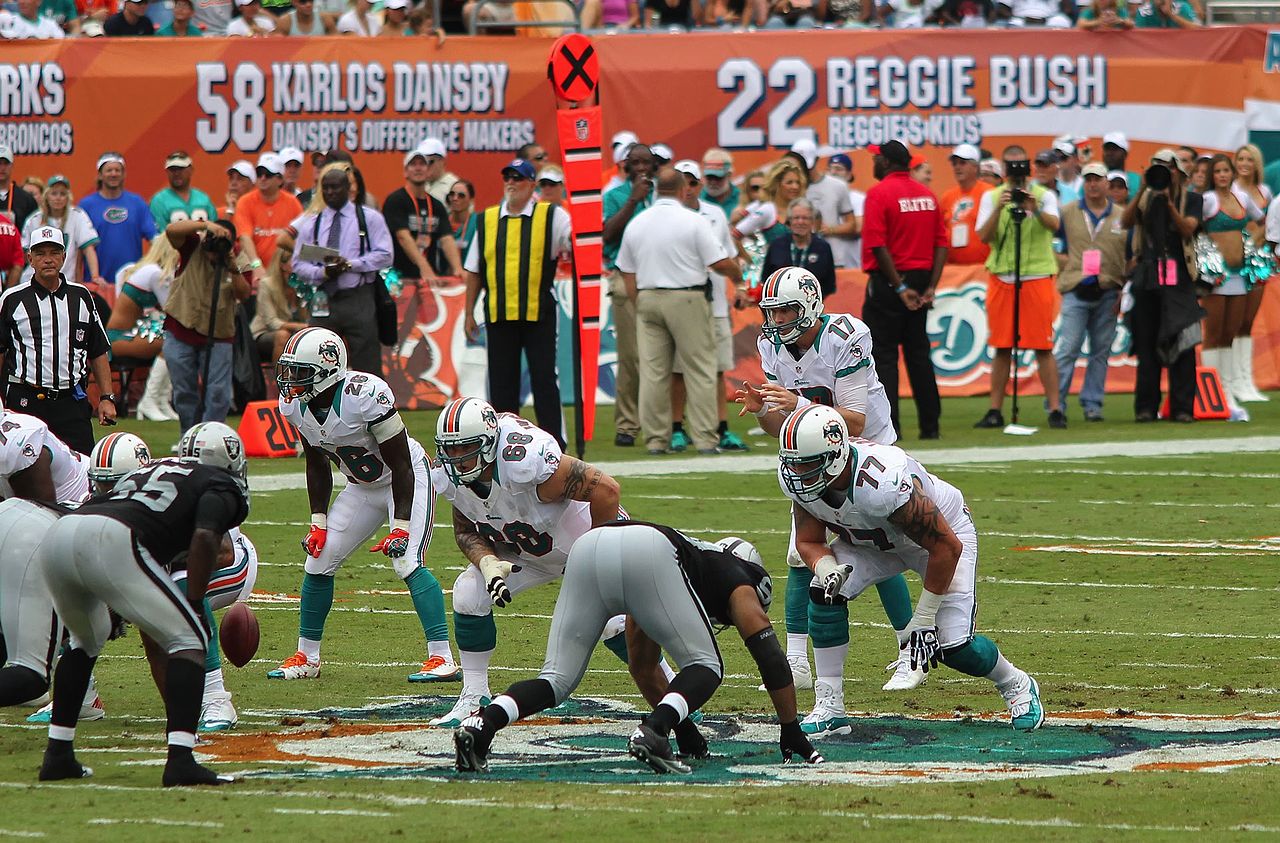 As local publishers have moved to more reader supported business models such as subscriptions and memberships, outlets have had to find new and innovative ways to convince their communities to pay for their journalism.

The Miami Herald is no exception, and last summer it launched an experiment. It created Sports Pass, a sports-only subscription product. The idea originated in the newsroom, and a cross-functional team was able to take Sports Pass from an idea to launch in just two weeks.

We’re publishing Solution Set this week in partnership with The American Press Institute’s Better News. Here, you can read about how the newsroom helped drive the effort. Over at Better News, you can learn more about how the Herald thought about targeting specific audiences for this coverage and promoted the work to readers. (The idea for Sports Pass emerged out of the Knight-Lenfest Newsroom Initiative, which is funded in part by the Lenfest Institute.)

I also want to introduce you to Lenfest Institute communications associate Nick Kozankywycz, who wrote this issue of Solution Set.

Here’s Nick with the TLDR:

In fall 2017, the co-founder of The Athletic, the locally focused subscription-based sports site, put metro newspapers on notice.

“We will wait every local paper out and let them continuously bleed until we are the last ones standing. We will suck them dry of their best talent at every moment. We will make business extremely difficult for them,” the site’s co-founder Alex Mather told The New York Times.

Mather later apologized, but the VC-funded site has continued to launch new sites across the country and hire reporters and columnists away from local newspapers.

By August 2018, the Athletic had set its sights on Miami, and was planning to launch a site in South Florida.

“The Athletic had been going around all over the country taking reporters from every news organization,” Miami Herald sports editor Alex Mena told me. “Whether they were going to be competition or not, they were going after our staff.”

Inspired by The Athletic’s impending move, the Herald’s sports staff was motivated to experiment to fend off the challenger.

Beyond The Athletic’s coming launch, the Herald’s sports reporters received constant feedback from subscribers and readers over Twitter and email: They regularly heard that readers wanted more niche sports coverage.

The anecdotal feedback they received was that there were many readers and subscribers — especially those who lived outside of Miami or who were new to the city — that solely wanted the paper’s sports coverage.

Based on this feedback, The Herald’s newsroom began kicking around an idea: Could the paper offer a sports-only subscription?

With the sports-only product, the editors thought they might be able to reach a different tier of readers who wouldn’t otherwise subscribe to the Herald.

“They didn’t want to read everything else that was being offered, but certainly they wanted to read [columnist Barry Jenkins,]” Mena said. “They did not feel like they wanted to pay full price.”

The Athletic deciding to take its talents to South Beach only accelerated the plan.

Mena, the Herald’s sports editor, and his team pitched the idea to the paper’s leaders. They supported the sports-only subscription strategy and began bringing in colleagues from McClatchy, the Herald’s parent company. This early backing allowed the process to run smoothly.

The McClatchy audience, marketing, and technology teams were heavily involved in creating the sports-only subscription, which they called Sports Pass. They set the subscription price point (more on this in The Numbers), integrated Sports Pass into the Herald’s existing pay meter, and created a special landing page to promote the subscriptions.

From ideation to launch, the whole project took two weeks. And the newsroom was involved every step of the way. (We’ll talk about this in The Lessons.)

“This was a sports initiative fully endorsed by the newsroom executives and propelled by the sports reporters through social media,” Mena told me over email.

And as soon as Sports Pass launched last August, reporters and columnists helped promote the product. The Herald also used UTM codes to track which reporters were driving the most subscriptions.

By launching in time for football season, the Herald was able to capitalize on interest from fans of the Dolphins, the city’s NFL team.

Good news: A Miami Herald sports-only digital subscription now available. You can read all of our content for $30 a year or $2.50 a month. How to sign up: https://t.co/wY0BjxLF3t

About 80 percent of the Herald’s Sports Pass subscribers come from outside the paper’s South Florida market.

Mena wouldn’t share the total number of Sports Pass subscribers. In its first-quarter earnings report, McClatchy reported that it had 179,100 digital-only subscribers, an increase of 59.6% from the same time period in 2018.

A Sports Pass subscription costs $30 for the first year and $50 for subsequent years. (For comparison, a full subscription to the Miami Herald is $129.99 a year.) 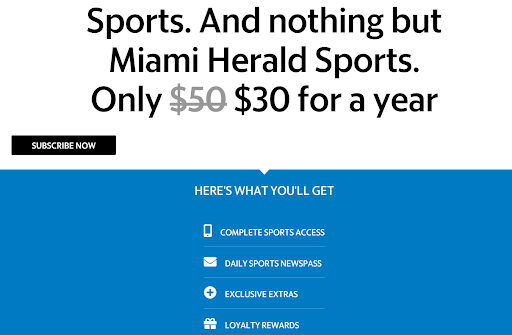 The Herald only offers an annual subscription for Sports Pass.

“Most sports are seasonal, but in Miami, the season’s year-round, especially around recruiting,” Mena said.

An annual subscription to The Athletic costs about $60.

Move quickly: The Herald was able to launch Sports Pass in just two weeks. There were two looming deadlines that emboldened the paper to move so fast: It wanted to beat its competitor to market and also have the product up in time for the start of football season.

While deadlines are a good motivator — we are journalists, after all — news organizations should do more to encourage rapid experimentation.

By getting products out into the market, outlets can see how readers actually respond to them. They can then iterate and make tweaks to continually improve the offerings.

One hand can’t carry the load: One of the reasons that the Herald was able to launch Sports Pass in just two weeks was because it involved leaders from across both the paper and McClatchy’s corporate team.

“The problem required bringing together various stakeholders: the sports editor, the executive and managing editors, the regional editor, and growth and social media editors in the newsroom, as well as members of McClatchy’s audience, product and design teams,” Herald managing editor Rick Hirsch and Adrian Ruhi, the Herald’s growth editor, wrote in Better News.

Both logistics and feasibility among topics like price points, features, coverage, design, and communications require that many people come together to take responsibility. Running cross-team initiatives can really bring out the potential that the intelligent and creative minds of your organization have to offer.

It was particularly notable also that the idea for Sports Pass came from the newsroom. By including journalists in these discussions, leaders can help spread wider understanding of the business models that support journalism while also positioning the newsroom as a key mechanism for attracting and retaining subscribers.

“Other reporters can see the benefit of being out there touting a subscription, where you see now a lot of news reporters kind of tweeting out ‘Read local. Subscribe to the Miami Herald,’” Mena said.

The Sports Pass program has also encouraged other reporters in the newsroom and has shown the potential that subscriptions can have.

With the start of another football season looming, the Herald is planning to ramp up promotion of the Sports Pass product to attract new subscribers and to also retain the readers who subscribed at the launch last year.

It’s in the process of also better integrating Sports Pass into its subscription offerings. For example, some readers who hit the paywall while reading a sports story will be prompted to sign up for Sports Pass, not a full subscription.

Ultimately, the Herald wants to continue serving readers while offering a valuable product.

“We certainly have a great product to give and I think readers are really the ones who benefit from this,” Mena said.

• API’s Better News also wrote this week about the Sports Pass program. Check out their story for more details on its origin.

• The newsroom can be a huge driver of subscriptions. CALmatters CEO Neil Chase wrote about how your newsroom can keep your most loyal readers coming back.

• And here’s Poynter last year on Sports Pass. One interesting fact: One Herald Dolphins reporter has more than 12,000 Twitter followers from the UK. Fins Up, mate!

Hey — this is Joseph again. In February 2018, I wrote about the partnership between the nonprofit Charlottesville Tomorrow and The Daily Progress newspaper. Both outlets are based in Charlottesville, Virginia.

For nine years, Charlottesville Tomorrow shared its reporting with The Daily Progress, which reprinted it both online and in print. But the collaboration is no more.

For many years, our partnership with The Daily Progress served both sets of readers, increasing the amount of local coverage in their paper while broadening our distribution. Today, Charlottesville is a place where we’re all questioning and challenging the inherited models that have reinforced harmful power dynamics.

If Charlottesville Tomorrow intends to become a new kind of local newspaper, we need to stand on our own, question all of our assumptions, and engage our community in the pursuit to do better. We can serve our readers by providing a clear coverage alternative in our areas of focus. More significantly, we can also be a workshop for the future of hyperlocal journalism.

We’re taking a break next week for the July 4 holiday, but we’ll be back next month!