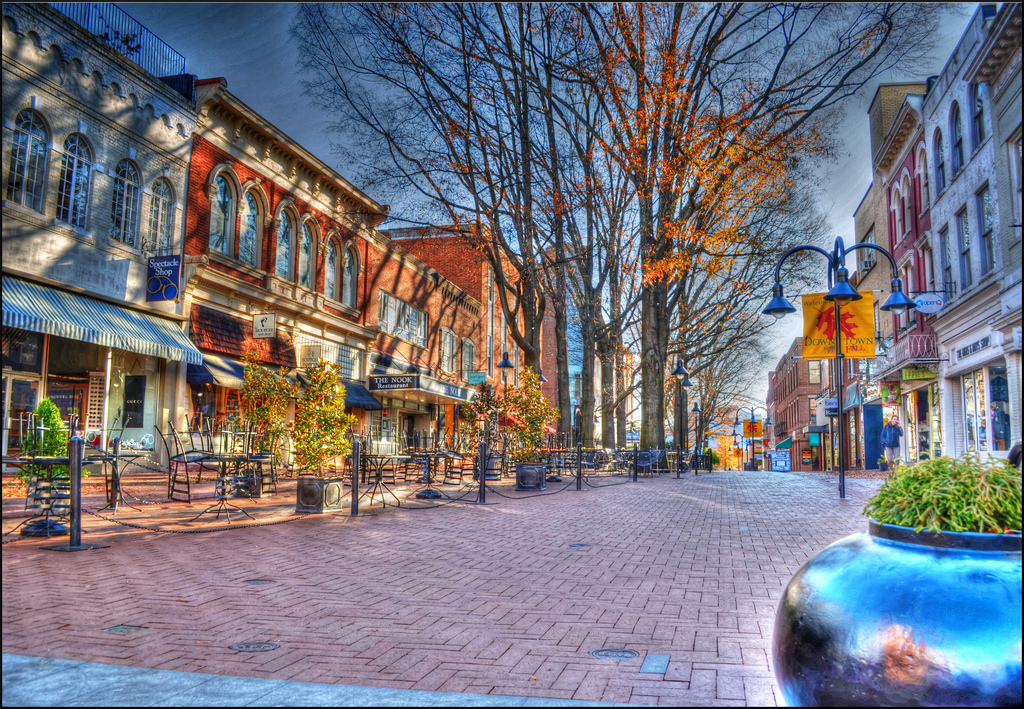 In a time of shrinking resources for local news organizations, two Virginia publishers have come up with a one-of-a-kind relationship that’s persisted for nearly a decade. Stories written by the nonprofit site Charlottesville Tomorrow are republished on a near daily basis in the local newspaper, The Daily Progress.

The arrangement has helped each organization better cover their community in Charlottesville, Va. This week in Solution Set we’re going to examine how the partnership works and learn how it has persisted for so many years.

Solution Set is a new weekly report from The Lenfest Institute for Journalism and the Solutions Journalism Network. Every Thursday, we take an in-depth look at one neat thing in journalism, share some lessons you can take away, and point you toward other excellent resources. (You can catch up on our first five issues here.)

And we want to hear from you: What do you think of Solution Set? What type of coverage would you like to see? Is there something going on in your news org that you think others can learn from? Let me know. Email me at [email protected], or find me on Twitter at @ylichterman.

Here’s the TLDR version of what you need to know about the Charlottesville Tomorrow and Daily Progress partnership:

• The Challenge: Confronted with diminished resources, The Daily Progress, a newspaper in Charlottesville, Va., publishes stories produced by Charlottesville Tomorrow, a local nonprofit news outlet.• The Strategy: The outlets share story budgets each week and will divide up events and meetings that each will cover.

• The Numbers: More than 2,300 Charlottesville Tomorrow stories have been published by The Daily Progress.

• The Lessons: Collaborations require trust and transparency, but the learnings and influence can extend beyond the initial partnership.

• The Future: The publications are hoping to deepen their relationship and collaborate in new ways.

• Want to know more?: Read past coverage of the partnership and learn how other news organizations are collaborating and sharing coverage

Launched in 2005, Charlottesville Tomorrow’s mission is to cover what it calls “quality of life issues” in the city. It focuses on topics such as land use, transportation, education, and affordable living. It doesn’t stray from those coverage areas.

By 2009, The Daily Progress was facing the same issues that virtually every newspaper has faced – shrinking revenues and limited resources. Then-managing editor McGregor McCance came to Charlottesville Tomorrow with the idea to partner.

The partnership continues today, with Charlottesville Tomorrow stories appearing almost daily in the paper. The arrangement has persisted even as the paper, in that time, has had two owners, three publishers, and four managing editors. And now it will withstand a transition at Charlottesville Tomorrow as Wheeler, who has been with the site since the beginning, is leaving this month.

What has made the partnership so successful, and how has this one-of-a-kind arrangement lasted nearly a decade?

When there’s a big breaking story, both teams will sometimes cover the story. However, that rarely happens. If both outlets are planning on going to a meeting or event, one will change its plans or if they both go they’ll divide up the stories and each take a different angle. When they both have reporters at an event, they’ll figure out logistical issues such as who is going to send a photographer.

For instance, last fall, to cover Charlottesville’s local elections, each outlet wrote three stories about the results and coordinated the coverage.

When a Charlottesville Tomorrow story is slated to run in the paper, an editor at the nonprofit will do the first round of edits. Once the story is in good shape, they’ll send it to the newspaper for copyediting.

Most of the communication between outlets occurs over email. They wanted to try Slack, but “we couldn’t get corporate to approve it,” Wheeler said.

Wheeler also said and he Jiranek had lunch about once a quarter to check in and touch base about how things were going.

And while Wheeler said both publications respect each other’s ability to get a scoop and their sources, they often will help one another if they can. Sean Tubbs, the site’s senior reporter, has worked for Charlottesville Tomorrow since 2007 and will often advise young newspaper reporters who are new to their beats and the city.

Also, Charlottesville Tomorrow’s office is on a pedestrian mall in downtown Charlottesville and sometimes people come in to share news with the site. “We have people walk in all the time and give us scoops or hand us documents,” Wheeler said.

“Sometimes they are out of our coverage area. Then, we just forward it to the newspaper and say here’s a good one, go to town on this. We try to share a lot in story ideas, but also in how to get ahold of sources. There’s a lot of networking that goes on at the reporter level: Who should I ask about this? Where would I find that? It’s pretty collegial and collaborative.”

But even with its diminished staff, the paper published more than 500 Charlottesville Tomorrow stories from 2009 to 2012, according to a 2012 story in the alt weeklyC-Ville.

Today, it has published more than 2,300 stories written by the nonprofit, and Charlottesville Tomorrow says it produces more than half of the paper’s coverage on growth, development, education, and local politics.

Last spring, The Daily Progress had a circulation of about 14,700 — down more than 30 percent from 2012, according to a CJR profile. At that time there were 29 employees in the newsroom, CJR reported.

Charlottesville Tomorrow has a staff of five full-time employees plus interns. It has a 2018 budget of $476,000.

“For the most part, not much has changed. When Warren Buffett’s company bought the newspaper, their attorneys wanted to see the agreement as part of a review of all the legal agreements they were inheriting. The lawyers got involved in that, and they took it from a two-page agreement to four pages. It’s pretty boilerplate.”

• Give different perspectives a chance Partnerships and collaboration are increasingly common in the journalism world, but it’s rare to see two organizations collaborate for as long as Charlottesville Tomorrow and The Daily Progress.

Trust, a willingness to look at situations from new perspectives, and ultimately the desire to put the community first have contributed to the long-term nature of the deal, Wheeler and Jiranek said.

A corporate-owned newspaper took a risk subcontracting some of its core coverage to a small nonprofit newsroom, but they felt enough of a responsibility to the community that they decided the partnership was worth the extra work.

For Charlottesville Tomorrow, it was critical that the paper didn’t view it as a competitor. It also helped that Wheeler’s background isn’t in journalism. He was previously a member of the local school board and was most interested making sure the community was informed.

Many people who start small local startup news organizations previously worked at newspapers and may have hold-ups about working with the outlets where they used to work.

“The idea of partnering with their old employer to do things better is not high on their list of go-to solutions. That’s what I’ve realized,” Wheeler said. “There’s built-in friction and a wall between the people who lost their job at the newspaper and then the newspaper being willing to outsource part of its newsroom. They feel a responsibility that the news that’s in their paper is theirs — they wrote it, they can vouch for it, etc.”

At first blush, if a partnership (or any other idea, really) doesn’t seem like it’ll work for your organization, try looking at it from a different perspective. What would an outsider think? This type of thinking might change how you approach opportunities.

“It really comes down to clear expectations and good communication, which is no surprise,” Wheeler said. “If we weren’t clearly communicating on what our plan was and then delivering on those expectations, and we were a source of frustration as opposed to enrichment for the newspaper, then they would have passed on renewing this. Likewise, if we kept giving them content and they were unable to print it, and they kept saying no to our stories, we’d say fine.”

And because The Daily Progress knows exactly what it’s getting from Charlottesville Tomorrow, it’s able to use its limited resources to cover other angles that it might not be able to otherwise.

• Extended influence: Charlottesville Tomorrow takes a holistic approach to the way it covers the topics it focuses on. For instance, one of its core issues is land use, which encompasses everything from affordable housing and retail development to public infrastructure projects.

Having seen what’s worked for Charlottesville Tomorrow, The Daily Progress is now trying to rework its own business coverage in a similar way by focusing on issues that affect all types of businesses in their coverage area.

So even when partners aren’t directly collaborating on a project, gaining exposure to how others approach their reporting can help news organizations rethink and optimize their own operations.

• Super fans are your best resource: Direct reader revenue is becoming increasingly important for news organizations — especially local publishers. (If you’ve been reading Solution Set, you know this is a theme we keep coming back to.)

The people who give news organizations money are their most loyal consumers, and providing additional and higher quality coverage gives them more value. They can be your best advocates and also can help attract new supporters.

In a college town like Charlottesville there are a lot of avid news consumers, and this partnership helps both outlets serve that contingent. It makes a Daily Progress subscription more valuable with added coverage and also helps Charlottesville Tomorrow solicit supporters and gain more publicity.

Early on in the partnership, both parties recognized that they weren’t in competition and were both benefiting from the affiliation with one another.

“We would not be here today, in my opinion, without this partnership,” Wheeler said. “We would’ve folded. We just wouldn’t have been able to raise the resources each year.”

With Wheeler leaving Charlottesville Tomorrow, the site is now looking to hire a new executive director. He begins his new position later this month.

But when we spoke last fall, before he announced his plans to leave, Wheeler told me he’d like to hire another reporter to focus on investigations and also find additional ways to partner with The Daily Progress.

“It doesn’t happen very much right now because there’s so much news to be taken care of right now as it is. To put two people on the same thing, we’d miss some other event or story, but there are some collaborative opportunities that could be interesting and fruitful.”

• Here’s the excellent CJR profile about the Charlottesville Tomorrow-Daily Progress relationship that I cited earlier in the report.

• Need more resources on collaboration? Visit CollaborativeJournalism.org, a hub of resources from the Center for Cooperative Media at Montclair State University. You’ll get some great advice there.

•In the lead up to the Super Bowl, The Boston Globe, The Minneapolis Star-Tribune, and The Philadelphia Inquirer shared their coverage with one another. Poynter has all the details: (Disclosure: The Lenfest Institute is the parent organization of the Inquirer and everyone here in Philadelphia is beyond excited that the Eagles won the Super Bowl.)

Anything to add?
Know of any other cool collaborations we should know about? Is there anything else we should cover in Solution Set?

Send me an email, I’m at [email protected]’ll share some of the responses in next week’s edition.

See you next Thursday!