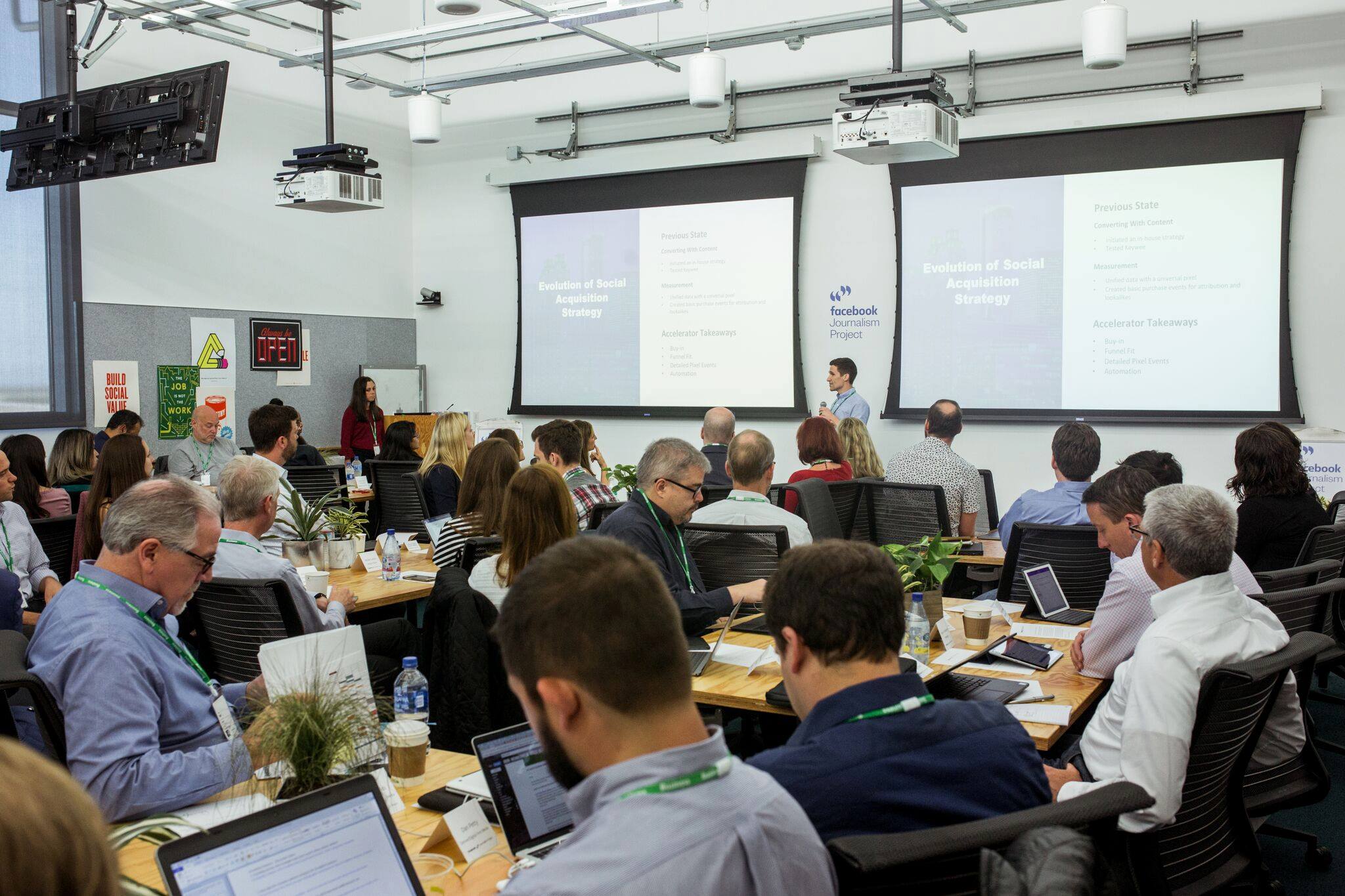 Throughout the final day of the Local News Subscriptions Accelerator at the Facebook offices in Menlo Park, publishers shared their learnings and results from the 12-week program with fellow participants. They shared what worked, who inspired their ideas, and what they plan on focusing on in the coming months. Here are some of the publisher results and lessons from the 12-week Accelerator:

The Seattle Times identified early on that they were going to attempt a series of incremental changes. They focused on leveraging Facebook for engagement and subscriptions, expanding their A/B testing, partnering more closely with the newsroom by adding a newsroom liaison focused on digital subscriptions, and implementing learnings from other organizations. They were also inspired by The Boston Globe’s approach to one-day sales, and tried one out for themselves.

The Denver Post’s biggest takeaway was the sheer number of takeaways. They cited learning from Philly.com, The Boston Globe, and Gannett for influencing the myriad ways they improved their subscription approach over the 12 weeks. Seeing the success of other organizations in the Accelerator, they were better equipped to sell the idea of digital subscriptions locally and at the corporate level. They also focused on comparing results to logical benchmarks, improving many aspects of customer purchase experience, and building a culture of testing and learning.

The biggest realization for members of the Miami Herald was that there were too many loopholes for potential subscribers to get by the “paywall.” For instance, they were excluding visits from email newsletters and social media from incrementing the free-article meter. They focused on closing those loopholes so a larger pool of readers would be asked to pay.

The San Francisco Chronicle initiated a number of small changes across the board, but they had one initiative John Rockwell, the director of subscription sales and retention, calls “The best thing we’ve ever done.” The idea came out of the Austin session. They decided to do a sale around the California primaries and NBA finals. They knew audiences would be craving sports and political coverage during this time. They built custom audiences with the Facebook Pixel, approached every email with an A/B test, and added a newsletter sign-up module on story #1.

The Tennesean and The Indianapolis Star (Gannett)

Participating members from Gannett, the owners of 109 local news organizations including The Tennessean and The Indianapolis Star, identified two ways to improve subscriptions to their publications. First, they noticed the stop rate, meaning the percentage of digital visitors stopped by a paywall, for The Tennessean was low. Second, they wanted to gain more free-trial signups. Similar to The Miami Herald, they decided to close side doors and loopholes for The Tennessean, and they created daily/weekly/monthly reports on the stop rate. To help boost free-trial signups for The Indianapolis Star, they implemented call-to-action units in Facebook Instant Articles to drive 30-day signups.

Jeff Carney, Corporate Director/Digital Content Development and Lissa Cupp, Chief Marketing Officer, from Berkshire Hathaway Media Group recognized that the only way to grow their subscription business was by having everyone “on the bus.” Getting the newsroom on board was key and they focused on getting buy-in for subscription goals at the Omaha World Herald. That’s why they felt their biggest takeaway came from thinking about measuring subscriber acquisition by news people are willing to pay for. That meant making employees part of this story, focusing on quality, trusted journalism readers want and changing the focus of reporting metrics from page views to time spent, and other metrics that signaled quality.

Newsday focused on four key ingredients for their strategy: Cultural buy in and prioritization across the business, marketing optimization through test and learn experiments, better targeting of potential customers, and reviewing content to find what content types are most correlated with subscription acquisition.

The Atlanta Journal Constitution focused on a number of initiatives; one in particular was getting more acquisition through social channels. They implemented the Facebook Pixel working closely with their analytics team to get further pixel events coded. They also improved targeting of high-propensity behaviors.