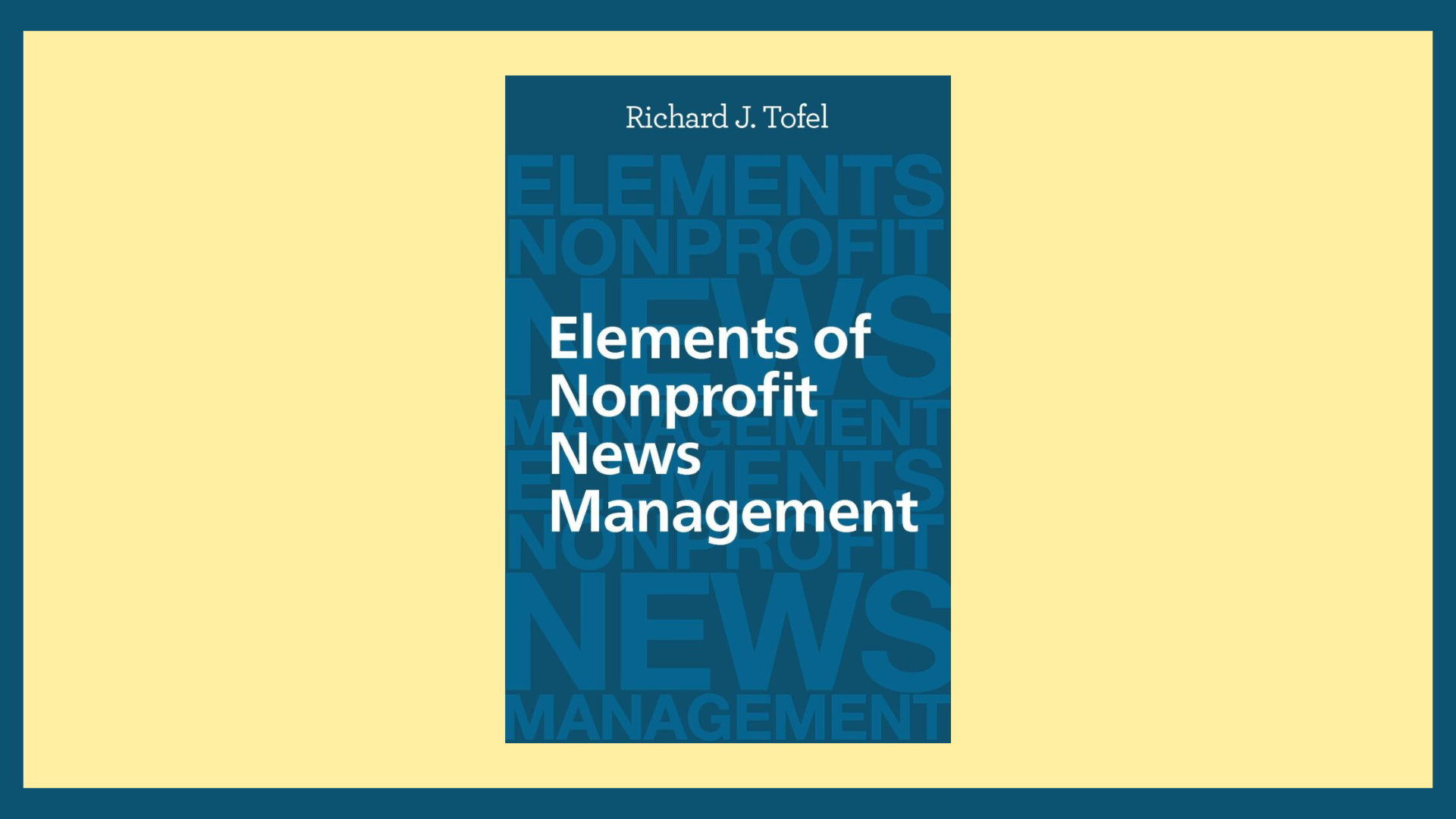 Over the past decade, as the crisis in local journalism has accelerated across the United States, nonprofit newsrooms have proliferated to help fill news and information gaps and to keep their communities informed. But launching and sustaining a nonprofit news organization requires skills that go above and beyond good journalism.

To help nonprofit news organizations grow and thrive, The Lenfest Institute recently published “Elements of Nonprofit News Management”, a new book by Richard J. Tofel, the former president and founding general manager of ProPublica. Tofel has decades of experience in the news industry, including many years spent running a successful news organization. His book covers a range of topics useful for any media professional to consider, from funding methods to editorial independence.

We recently organized a free virtual event to celebrate the launch of the book. During his talk with Jim Friedlich, The Lenfest Institute executive director and CEO, Tofel shared many key lessons from both the book and his experience running ProPublica.

We’re sharing some of the major takeaways from Tofel and Friedlich’s conversation. To learn more, check out the full recording, order your copy of the book, or download a free PDF.

A new nonprofit news organization ideally should have around 18 months worth of operating expenses before launching, Tofel said. However, this can be a challenge for many publishers as plenty of donors and funders will want to see proof that a startup can support itself before they invest in it, no matter how convincing a proposal may sound.

He went on to discern the difference between people who can clearly visualize “what an apartment will look like even when it’s in disrepair,” as opposed to those who only see a project that hasn’t been finished yet. The majority of funders fit into the second category, which means newsrooms will have to raise sufficient funds and work hard to find the right kind of funders who believe in them at the start.

In order to help define its purpose and attract those early funders, a news organization must craft an effective mission statement that successfully communicates its goals. Tofel pointed out how surprising it is that the name Hershey is synonymous with the largest chocolate manufacturer in the United States – and yet, when he was researching The Hershey Company’s mission statement, he noticed it didn’t actually include the word “chocolate.” Similarly, many major companies may put out mission statements that either sound unclear or don’t align with the actual work they do. To avoid this pattern of vague mission statements, Tofel recommended aiming for language that is as clear and specific as possible, even if it feels like stating the obvious.

He suggests that organizations look at what their mission statements are promising and ask themselves, “How much does that apply to pretty much everyone in the universe? You’re not really saying anything; there’s nothing objectionable about it. [On the other hand,] the more you focus, the more likely you are to be able to hit your targets.”

As an example, ProPublica crafted its own mission around “the moral force of investigative journalism.” This wording helps newsroom employees determine which stories are most important to cover.

The importance of partnerships

Gaining a following overnight is a rare task, but startups can still grow their audience significantly by leveraging partnerships with major organizations. Tofel gave the theoretical example of a younger news organization running a story with a seasoned organization like The New York Times; he pointed out that although “99% of the readers are going to be theirs,” a certain amount of readers will inevitably take notice of the lesser known organization. Whether it’s collaborating on a feature or being mentioned in a newsletter, partnering with an established newsroom is a great way for a startup to find its footing.

Tofel also stressed how these partnerships can be beneficial for both sides. ProPublica’s extensive list of publishing partners – names such as ABC News, The New York Times and The Chicago Tribune – were able to publish top-tier coverage without using as many resources, while ProPublica itself got to engage new readers and expand its reach.

Editorial independence and transparency are essential

It is crucial for news organizations to draw clear lines between donors and editorial staff, which may be challenging for new news organizations or funders new to journalism. Editorial independence is a topic that newsroom leaders must take a direct stance on, particularly when communicating with their donors.

Tofel shared how ProPublica was upfront with its donors and board members from the very beginning that they would have no control over the editorial product and would not be made aware of the material in advance of its publication, which was a boundary set successfully.

“We were convinced that they would not try and interfere with editorial independence, and they did not… this is the kind of thing you can count on the world to police,” he said.

ProPublica, and the vast majority of successful nonprofit newsrooms, list their donors publicly, disclosing as much information about them as possible, so that level of transparency extends to their audience as well.

The journalism field has experienced drastic change over the past few decades, and so has its job market. Reporters, editors, or producers may come to mind when you think of newsroom positions. But as Tofel pointed out, these traditional roles all fall within the category of “20th-century” newsroom jobs.

These jobs have developed along with the media industry’s shift from print to digital, and many startups often leave them out of the original planning process. As the years go on, Tofel said leaders should hire an increasing proportion of news staff that fits into the “21st-century” category.

Audience development professionals, in particular, perform vital functions in ensuring that news organizations are able to expand and meet the information needs of the diverse communities they serve.

To provide additional support for news professionals working in the world of audience engagement, The Lenfest Institute has assumed management of Audience Community of Practice, a project of the Tow-Knight Center for Entrepreneurial Journalism at CUNY’s Craig Newmark Graduate School of Journalism. About 75 members from news organizations such as The New York Times, ProPublica, The Detroit Free Press, KQED, and more currently make up the group. You can read more about The Lenfest Institute is working to expand the Audience Community of Practice and join here.

Choose your board of directors

A board of directors helps shape the strategic direction of a nonprofit news organization, and board members should be among an outlet’s biggest supporters. New nonprofit news organizations should  seek out board members who can help make the mission work, Tofel said. They should be financially proficient, reliable individuals who get along well with their peers and are able to work collaboratively. To protect editorial independence, board members should display a sufficient level of modesty and not let their own interests interfere with the work.

During his time at ProPublica, the organization consistently tried to bring on diverse board members with as many interesting perspectives as possible – in more simple terms, “people who other people want to go to meetings with.” One unpleasant or combative attitude can easily derail a meeting and prevent the work from getting done. Ultimately, board members should maintain enough decorum to “stand up for what is right… but not be obnoxious while doing it.”

Nonprofit news organizations can track their success through a number of methods, and there’s no one right way to measure it. ProPublica began publishing tri-annual impact reports not only to keep its supporters informed about its work, but also to ensure its journalists understood how their work is aligning with its mission. Defining metrics of success – whether that be through audience engagement, donor acquisition, or scope of coverage – can showcase the value of an organization’s work in a unique way.

Tofel also stressed the importance of “outcome over output” in the sense that institutions should keep track of the steps they’re taking to achieve their goals, not just the goals themselves. These steps might not always lead to a desired outcome, but it’s important to acknowledge them anyway. Measuring “that at which you might not necessarily succeed,” rather than just showing off an organization’s most impressive achievements, demonstrates trustworthiness and transparency.