“At the end of the day, journalism is all about helping us stay connected as a community and accountable to one another,” said Anne Galloway, Executive Director of VTDigger. “It’s important that we find a way to make the business model work, so we’re able to continue to keep professional journalists out there in the field protecting the public’s right to know.”

“We’re still figuring out how to pay for this kind of journalism. Thanks to the things that we’re learning here in the Facebook Accelerator Program, we’re confident we’re going to continue to attain some major [membership] increases in this year and beyond,” said Andy Hall, Executive Director and Co-Founder of the Wisconsin Center for Investigative Journalism.

In the final in-person session, publishers took a step back and shared their top-level takeaways. Here are some of them:

“There are communities across the country that are desperate for high-quality coverage,” said Lance Knobel, Co-Founder and Publisher. Berkeleyside believes its readers appreciate the range of its journalism, and spurred by the Accelerator, increased the number of “asks” (direct membership appeals) for engaged readers to support their coverage. The aim, Knobel said, was to “ask, ask again, and then again.” In the process, Berkeleyside implemented a culture of constant testing to see which membership ‘asks’ worked best. This culture also includes using data to drive decisions about those tests.

Bridge Magazine also focused on clearer and more frequent calls-to-action for reader support. Readers had always been able to donate, said Bill Emkow, Growth Strategist. But they may not have known they could donate. “We’d made the option available for people, but we never told them what we were asking for,” said Emkow. “We had to tell our readers what we wanted from them for membership to work. It worked.” To do so, the team honed in on a few data points indicating readers with high membership potential. Engaged readers included, for example, users with 5+ sessions per month and newsletter subscribers with a 60% open rate or higher. 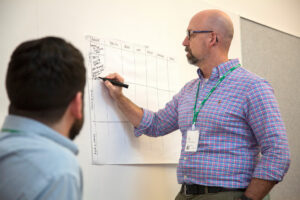 “Don’t get comfortable” was the big learning for City Limits, said Adina Berliant, Development Manager. The team applied this learning by working with agility, using data to inform decisions, setting aggressive growth goals, and testing, testing, testing. “We’ve also learned that stickiness is king,” added Fran Skennion Reilly, Executive Director and Publisher. To apply this learning, the City Limits team has focused on improving the percentage of visitors with 4+ sessions and identifying various content elements that can improve engagement.

DPTV’s key takeaway from the Accelerator was to monetize the people who care about their mission in ways they had not previously considered. Over the course of the Accelerator, DPTV started supplementing on-air membership drives with more opportunities to activate membership on its digital platforms. Their loyal audience members were already consuming their content both on-air and digitally — why not ask for membership in both places more consistently and strategically? DPTV put a culture of testing into place to measure what works best in their digital membership drives.

Richland Source’s biggest learning during the Accelerator was that inclusion matters when trying to build membership. Everyone needs to get on the membership ‘bus’ — including the editorial teams and the business teams — to move towards a shared goal of increasing membership. With everyone on the bus, the team is now focused on increasing their asks to readers, improving their tech stack, evaluating the content experience on their site, and retargeting engaged readers.

Rivard Report learned two very important things from the Membership Accelerator. First, to increase membership, you need to collaborate across editorial and business teams. Rivard Report worked to set a unified membership goal that removed the separation between teams. Second, you need to experiment. Rivard Report is setting goals and conducting iterative tests with the motto “Don’t let ‘perfect’ be the enemy of ‘good.’”

Throughout the Accelerator program, publishers have participated in sessions covering everything from the 10 essentials of membership programs to email marketing, messaging, and the Scrum framework. Catch up on all the lessons and learnings here.