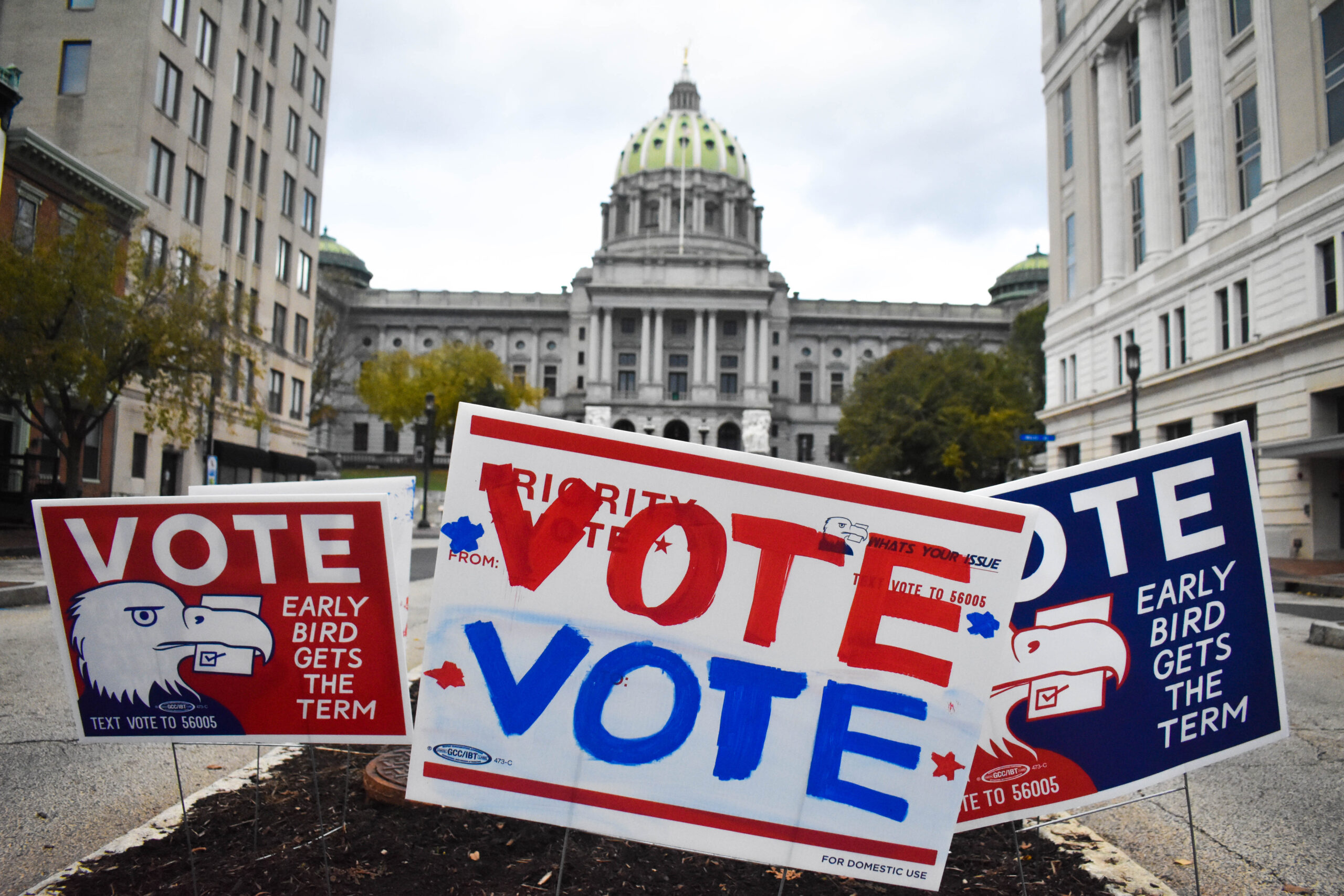 Voting signs in front of the Pennsylvania State Capitol in Harrisburg. Jelani Photography/Shutterstock

As the midterm elections draw near, Pennsylvania has become the center of the political universe. But as the national media focuses its coverage on the polls and the latest twist-and-turn of the horse race, Spotlight PA has worked nonstop to provide voters across the commonwealth with resources they need to make an informed decision before they cast their ballots.

“Our voter-centric coverage really places a priority on informing, equipping, and empowering people at the polls, whether that’s understanding the process, the candidates, the issues, or how to guard and protect themselves against misinformation efforts,” said Christopher Baxter, Spotlight PA’s executive director and editor in chief.

Spotlight PA covers statewide issues in Pennsylvania, and it shares its coverage free of charge with more than 90 other news organizations. It is publishing ongoing election coverage through its Election Center, a centralized page on its website to keep Pennsylvanians informed about the candidates, issues, and policies at the forefront of this year’s races. The Election Center also has easy links to help visitors register to vote, check their registration status, locate a polling place, request a mail ballot, and contact their county election office.

In addition, the page has an interactive sample ballot that helps voters identify key races in their areas. They can also track campaign finance reports and utilize a form to get in touch with Spotlight PA’s reporters.

With opposing candidates presenting very different plans for Pennsylvania’s future, we took a closer look at how Spotlight PA is reporting on the upcoming elections.

Even the most engaged readers tend to have fundamental questions about candidates or the voting process, which means it’s guaranteed that those who are less inclined to vote or keep up with politics have even more questions.

Confusion, Baxter said, is “often the stage that precedes misinformation or disinformation taking hold,” and horse-race coverage only magnifies that confusion.

Spotlight PA’s coverage focuses on where candidates stand on key issues, how to get involved in the voting process, and any other information necessary for voters to make an informed decision.

“Generally, from our standpoint of subscribers, numbers, and feedback, there’s just a tremendous hunger for more issue-oriented public service coverage of elections,” said Baxter. “We’ve followed that feedback, plus the enormous responsibility to contribute to preserving and strengthening democracy.”

In an article Spotlight PA published explaining its approach to election coverage, Baxter and Deputy Editor Sarah Anne Hughes shared insight into why their team is staying away from poll-based coverage.

“Horse race coverage has also been shown to exacerbate the extreme partisanship we see today,” they wrote. “Research compiled by The Journalist’s Resource, a project of Harvard Kennedy School’s Shorenstein Center and the Carnegie-Knight Initiative, shows that these stories can lead to distrust in news outlets and politicians as well as create an ‘uninformed electorate.’”

The 2022 ballot includes candidates for governor, U.S. Senate, Congress, and the state legislature — in addition to local races. Spotlight PA’s coverage has focused primarily on the gubernatorial and legislative races.

The outcome of the race for governor is particularly impactful this year, and Spotlight PA’s series – “One Vote, Two Pennsylvanias” – illustrates where the two candidates for governor, Democrat Josh Shapiro and Republican Doug Mastriano, stand on key issues such as the criminal justice system, LGBTQ rights, higher education, the environment, and more. In addition, Spotlight PA published a comprehensive guide to each candidate for governor.

When asked why the editorial team chose to focus coverage on this side-by-side comparison of Shapiro and Mastriano, Baxter called attention to how drastically different the two candidates’ visions are for the future of the state.

“Depending on which candidate wins, people’s lives could really substantially change,” he said. “We felt our role, but also our responsibility, was to really clearly communicate those two different visions to voters, to help them understand the choice they [will be] making and what would result from that choice.”

Spotlight PA has also released a series of other voter guides, including a basic guide to candidates in statewide races, tips on how to become a poll worker, and instructions for how to  to vote by mail. For the first time, the organization has decided to translate most of its voting guides into Spanish by working with a contracted translator and editor and distributing them through its five Spanish-language partners – PRESENTE: Pittsburgh Latino Magazine, Lebtown.com, Q Hubo, La Voz Latina, and BCTV.

These resources come at a particularly crucial time to reach and engage Spanish-speaking voters. While Spotlight PA has access to over 90 media partners across Pennsylvania, there are areas of the state that don’t have substantial coverage, and it’s easy for misinformation to spread ahead of the elections – especially if there is a language barrier involved.

In addition, Spotlight PA is looking toward more grassroots efforts to reach key communities across the state. Spotlight PA is continuously building more “community-based advocacy and organizational relationships” to further distribute Spanish-language content, according to Baxter.

“It’s one thing to translate the work…but if you’re not thinking about how to connect that work with the audience, and try and understand where they get that information, in what format [they’re getting it], you’re not even doing half the job,” Baxter added.

Baxter also said that Spotlight PA is continuing to make its resources more inclusive to Spanish-speaking readers, including plans in the works to hire a bilingual democracy editor ahead of the 2024 election.

Spotlight PA’s coverage will continue through Election Day — and beyond.

Spotlight PA’s plan is to compile its best practices for voters to independently educate themselves about the candidates they’re backing.

To further empower Pennsylvanians to actively engage with the voting process, Spotlight PA is also looking to launch a Democracy Initiative. It plans to hire a democracy editor and newsroom developer to take on future projects. The coverage could include guidance on how to request a voting finance report, get involved in elections locally, background a candidate, and more.

The Democracy Initiative’s main goal is to connect its voter-centric journalism, resources, training, and events with communities across the state, including audiences that don’t typically engage with – or feel left out of – traditional media. Through these efforts, Spotlight PA hopes to prevent disinformation and equip its readers with the tools they need to be more informed about any upcoming election.

“We would like to do more work in educating and helping people protect themselves from mis- and disinformation,” Baxter said. “We’re thinking through some potential automated email courses that we could develop to teach people in more depth about how disinformation takes hold, and how they could recognize false arguments, logical fallacies, and just be more savvy in the face of that.”