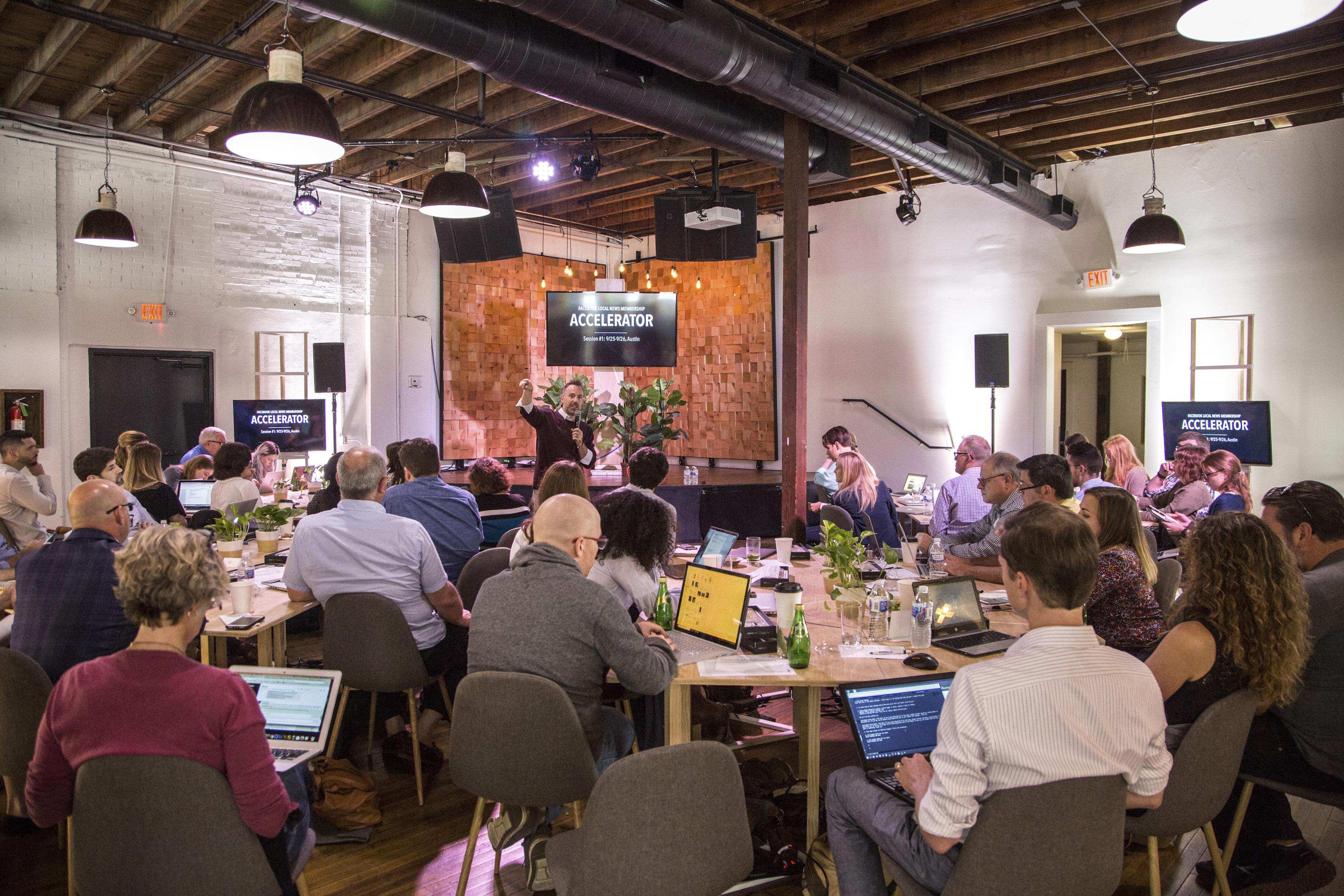 This year 500 news industry leaders will join the Facebook Journalism Project Accelerator, bringing the program’s membership to more than 1,000 global participants overall. The program works with news organizations to strengthen their business strategies both on and off Facebook through a mix of one-on-one coaching, in-person gatherings, and a community in which participants share their experiences.

After a training period, each participating newsroom receives a grant funded by the Facebook Journalism Project, administered by our partner organizations, to implement lessons learned.

The Local News Accelerator is led by Tim Griggs (executive director of the program and an independent consultant/advisor, formerly of The New York Times and The Texas Tribune) and administered by The Lenfest Institute for Journalism in the US and the International Center for Journalists (ICFJ) globally. The Video Accelerator is led by industry experts and organized by the ICFJ.

“We’re incredibly thrilled to continue the adventure in 2020,” said Griggs. “I’m truly grateful to the Facebook Journalism Project team for making this program possible and for enabling myself and a group of passionate and dedicated coaches and subject-matter experts to work with publishers around the globe on issues of such critical importance to sustainability of local news.”

Here’s what to expect in the year ahead.

The Local News Accelerator will gather regional groups of newsroom leaders to work on subscriptions (US and Europe), membership (US), reader revenue (Brazil), and audience development (Mexico and Asia-Pacific). We’ll also continue to build a network of publishers globally focused on solving problems and building opportunities together, bringing together past participants in Australia and New Zealand, Brazil, Canada, France, Germany, and the US.

“Over the past year, local news outlets have learned innovative ways to grow revenue, and video teams have adopted the best strategies for engaging audiences,” said ICFJ president Joyce Barnathan. “We’re delighted that we can have even more impact in 2020 by reaching hundreds more journalists.”

In January, for the first time we’ll bring our Video Accelerator program, which has helped publishers across Latin America, Europe, and Asia grow their digital video talents, to the US.  The following local news organizations will participate:

In February, we’ll kick off a Local News Accelerator for digital subscriptions with a new group of North American newsrooms.

“The Accelerator programs have driven meaningful results for local publishers by pairing strategic, practical coaching with additional resources that empower experimentation,” said Lenfest Institute CEO and executive director Jim Friedlich. “We’re pleased that even more news organizations will be able to participate in these programs and benefit from the insights they generate.”

If you’d like to be notified of Accelerator opportunities in your region, please email [email protected].

Industry leaders at events around the globe

In the US, we’ll bring publishers together at the second Local News Summit in Detroit in March, co-hosted with the Knight Foundation and the Online News Association (insights from last year here). We’ll also apply this collaborative model at inaugural Summits in Singapore in February, co-hosted with the Reuters Institute for the Study of Journalism and Splice Media; in Brazil in August; and for the second time in Europe in November.

Here are some success stories from participating newsrooms from around the world.

The 14 metro newspapers that took part in the first U.S. Digital Subscriptions Accelerator reported generating about $5 million in lifetime value from their growth in paid subscriptions and email newsletters. Most of the publishers converted 5 to 10% of their free newsletter readers to paid subscribers.

The 13 participants in the US Membership Accelerator,  — ranging from small digital startups to large legacy public television stations  — collectively generated more than $3.5 million in lifetime value and grew their newsletter lists by an average net gain of about 1,000 email subscribers each month over a six-month grant term.

Publishers in our US Subscription Retention Accelerator and other global programs are still working on projects with their grants and will report back on results in 2020. So far, those teams have reported gaining tens of thousands of new digital subscriptions and hundreds of thousands of new email newsletter subscribers.

Canada’s largest independent newspaper, the Winnipeg Free Press, increased free subscription trials from 2,000 to 10,000 in one month, after reducing friction in their registration and subscription process. “I am way more upbeat about our future today than I was in May when the Accelerator started,” said editor Paul Samyn. “We have more tools, more techniques, more ingredients — what we’ve had here are opportunities that are empowering and positioning us to do more.” Read more.

Michigan’s Bridge Magazine, a nonprofit news site, earned $300,000 in reader donations in 2019, up 51% from the previous year. They also increased their number of monthly donors by 111%, net email growth by 42%, and membership by 43%. “This grant gave us the bandwidth to experiment, expand, test, and develop a program that is showing immediate financial and engagement returns from our readership,” said CEO John Bebow. Read more.

New Zealand current affairs publication The Spinoff saw a 250% month-over-month spike in membership sign-ups. Before joining the Accelerator, the Spinoff was wary about asking readers to contribute. But the team took the plunge and saw success with a simple strategy: being themselves. A reader survey found Spinoff loyalists were willing to pay to support their “cause and mission.” So editors wrote directly to readers via their email newsletters, asking for help funding the Spinoff’s journalism. “What we’ve learned in the Accelerator has been quite transformative for our membership program,” said founder and managing editor Duncan Greive. Read more.

Melbourne’s Schwartz Media, publisher of The Saturday Paper, saw a 500% increase in click-throughs to their subscription page. The marketing and editorial teams worked together to move the subscription prompt into the body of their newsletter and crafted several pieces of accompanying copy to test. “We got everyone ‘on the bus,’ which is something we don’t do on a weekly basis,” said marketing coordinator Fushia Saulwick. “The Accelerator showed us that we can experiment, and what messaging works.” Read more.

Thai newspaper Khaosod used new storytelling techniques to craft a Facebook video that generated 3 million views and 69,000 reactions in 24 hours. The Khaosod video team’s participation in the Singapore Video Accelerator helped them produce one of the organization’s most successful videos of the year — a profile of an archer who overcomes major obstacles to become a national athlete.

Germany’s Rheinische Post registered 38,000 readers in the first three weeks of a new “freemium” subscription offering. “We thought it might be nice to have 1,000 registrations by the end of the first week. We had 2,500 at the end of the first day,” said Julia Morein, RP Digital’s head of product management. Read more.

While covering the devastating Lubrizol fire, one of France’s largest industrial accidents, French newspaper Paris-Normandie doubled their site visits and subscriptions for an all-time record-high month.  But can you ask readers to pay for journalism during a crisis? Using lessons from the Accelerator, Paris-Normandie struck the delicate balance of covering a big breaking news story while building the case to support their journalism. “And we will continue to explain why you should pay for good content,” said chief digital editor Amandine Briand. Read more.

Brazilian regional newspaper Estado de Minas hired five reporters to cover local news deserts and gained 890,000 new page views from those new areas, while laying the groundwork to gain more paying digital subscribers in the process. “Now the plan is for this coverage to expand beyond five regions soon,” said Liliane Corrêa, editor of digital content and social media. “The Accelerator program was paramount to the growth of our company.” Read more.

Brazilian local newspaper A Crítica sent its first-ever newsletter and tripled the email’s open rate in four months. Before  the Accelerator, A Crítica published online stories directly from print. Kickstarting a digital-first mindset, the team sent the publication’s first email newsletter and added subscription buttons to the site for the first time. “We changed the buttons and layout based on what we learned from the Accelerator sessions and, even though we knew the results would be ‘certain,’ we were surprised,” said content director Aruana Brianezi. “It is gratifying to put the teachings of coaches and colleagues into practice and to have such quick results.” Read more.

The Brazil Video Accelerator worked with 20 publishers who increased revenue and viewers after participating in the program. Using strategies now summarized in our Digital Video Playbook for Newsrooms, each team worked to solve technical, creative, and organizational challenges to making high-quality, high-performing digital videos. Participants told us the program helped bring a new video culture to their newsrooms and produce more and better video content.

Learn more about the Facebook Journalism Project’s $300 million investment in news organizations and programs committed to strengthening and advancing the future of journalism.