As Mexico prepares for national elections this summer, social media is filled with misinformation and disinformation. Images of made up New York Times polls have circulated on Facebook, there are bot-driven hashtags on Twitter, and there have been fake quotes attributed to celebrities.

To combat this, a group of news organizations and civil society groups came together earlier this year to launch Verificado 2018, a collaborative fact-checking and debunking effort.

This week in Solution Set, we’re taking a peek at Verificado to learn about its processes, how it’s engaging the public, and what the group learned from previous collaborations.

Solution Set is a weekly report from The Lenfest Institute for Journalism and the Solutions Journalism Network. Every Thursday, we take an in-depth look at one hip thing in journalism, share lessons and point you toward other useful resources you can learn from.

A quick programming note: I’m getting married this weekend (😬), so I’ll be taking a short break from Solution Set. We’ll be back in June.

Here’s the TLDR version of what you need to know:

• The Challenge: Social media in Mexico has been used to spread political misinformation, and as the country heads to the polls on July 1 to elect a new president, news organizations wanted to work together to combat the false information.

• The Strategy: Led by Animal Politico, AJ+ Español, and Pop-Up Newsroom, organizations across the country came together to create Verificado 2018, a collaborative fact-checking initiative.

• The Numbers: More than 90 organizations are participating in Verificado.

• The Lessons: Verificado is structured in a way that enables partners to participate at different levels while also empowering the public to help debunk fake content.

• The Future: The partnership plans to continue through the election, though they are open to additional collaborations.

• Want to Know More?: Learn more about Verificado and the tools it’s using. We’ll also send you to some links to learn more about the Mexican electoral process.

Voters across Mexico will head to the polls July 1 as the country holds what’s being called its largest election ever with more than 10,000 candidates running at the federal and local levels. Mexicans will elect a new president and 628 legislators in both chambers of Congress. The vote also includes local elections in 30 of 32 Mexican states (there are 31 states, but Mexico City has its own state-like authority even though it isn’t a state).

While the elections could have massive ramifications on the country, Mexico also has a long history of voter intimidation and misinformation that has been exacerbated in recent years by the advent of social media. (Scroll down to Want to Know More? for additional background on Mexico’s electoral history.)

So in late 2017 and early 2018 as news organizations began preparing to cover the election, a number of publications began thinking about how they would address the forthcoming wave of misinformation and disinformation.

In 2015, Animal Politico launched Mexico’s first fact-checking site, El Sabueso (The Hound).  As it geared up for the 2018 elections, it wanted to grow its impact and expand coverage. (Animal Politico is Facebook’s official third-party fact checker in Mexico.)

Together, all of these elements seemed ripe for a potential collaboration.

“Mexico has one of the most advanced systems for manipulation of social networks,” Tom Trewinnard, Meedan’s director of business development, told me. “It’s an environment ripe for the type of misinformation and disinformation that we’ve seen on the rise between 2016 and 2018. We started thinking through together what a collaboration might look like and how we wanted to get involved in that.”

Together, the three primary partners came together to create Verificado 2018, which means “verified” in Spanish. They’ve created a network with publications of all sizes and types from around Mexico.

Verificado’s coverage is focused on three main areas: Debunking false or misleading claims on social media and WhatsApp, live fact-checking during debates, and then monitoring the voting process on Election Day.

The coalition is operating out of a central newsroom in Mexico City, but there are participating outlets from all over the country.

Each of the lead partners has a primary role. Animal Politico, with its El Sabueso team, has taken the lead on fact-checking and debunking. AJ+ Español has used its multimedia expertise to produce videos and other social-media friendly coverage.

The fact-checking is being run on Meedan’s Check, an open-source platform designed to help manage the verification workflow. (Scroll down to Want to Know More? for more detail on Check.) The team also communicates via Slack and sends a daily email to all participating organizations outlining coverage plans.

Participating newsrooms can submit content that needs to be verified or fact-checked to the central newsroom, and together they’ll work to run down the appropriate information to verify or debunk it.

Verificado also has a dedicated hashtag, #QuieroQueVerifiquen (#IWantYouToVerify) for regular people to ask the team to fact-check a claim.

Every organization participating in Verificado has access to all coverage that’s produced. Outlets can share their coverage with the collective and the centralized Verificado newsroom will send it back out to the rest of the participating newsrooms so they can republish it.

“We all are here to spread the information that we fact check. Our objective is to grow the audience that is actually reading verified information. All the 90 allies are doing it. All of them are using newspapers, radio, TV, and different social media platforms in order to spread the things that we are publishing,” Tania Montalvo, Animal Politico’s executive editor, told me.

In March, prior to Verificado’s launch, Pop-Up Newsroom brought together more than 100 journalists from around Mexico to develop a collaborative workflow and to learn newsgathering and verification skills.

“[Verificado] has a high profile… the candidates now know about the project, which hasn’t been the case in some of the other ones,” Trenniward said.

Verificado is supported by the Google News Initiative and Facebook Journalism Project. Trewinnard wouldn’t disclose how much funding the project had received from the platforms.

• Know your role: A key component of Verificado’s initial success has been that every participant understands their role. Some publishers and organizations are doing more than others, but each outlet is committed to the overall mission and is willing to contribute what they can.

For instance, Televisa, Mexico’s largest broadcaster, isn’t playing an editorial role, but it is publishing Verificado’s coverage to its significant audience. Meanwhile, Monitor Expresso, a small local newsroom, is sending in fact checks and contributing reporting to the project.

“They are a very small newsroom in a very small state very far from [Mexico] City, and the things that they are doing now are published in national media,” Montalvo said.

The initiative also includes academics, members of civic groups, and subject matter experts. By expanding the group that participates in Verificado beyond traditional journalists, the project has been able to easily highlight insights and expertise — especially during breaking news events such as the debates.

“We are journalists, but we also know the scope of our work. If we are going to fact-check something about legislation or foreign direct investment, for example, we can pull out the data, but of course, we will be providing a better resource to our audience if we can work side by side with experts,” said Diana Larrea Maccise, a content editor at the Al Jazeera Media Institute, who is working on the project.

Verificado has put its mission of debunking false information and spreading factual information at the heart of its collaboration, and since all participants have bought into that mission they’re willing to play their designated role and support the goal of providing the Mexican electorate with genuine and verifiable information.

• Know your audience: Meedan and Pop-Up Newsroom have led similar collaborations before, but Verificado took what worked with Electionland and CrossCheck and made tweaks to make sure that it would properly suit the Mexican market.

Led by AJ+ Español, Verificado is running a WhatsApp account to help share its reporting and also to for citizens to submit questions. If someone asks a question or submits a piece of content to be verified, a Verificado journalist will respond directly with and accurate information.

“Our community in WhatsApp can basically transform into spokespersons of information. That enables people that are connected with us through WhatsApp to spread Verificado’s findings,” Larrea said.

Verificado will share its reporting more broadly in its WhatsApp status. It’s a format that’s similar to Instagram Stories, and users can direct message Verificado with questions about the story. 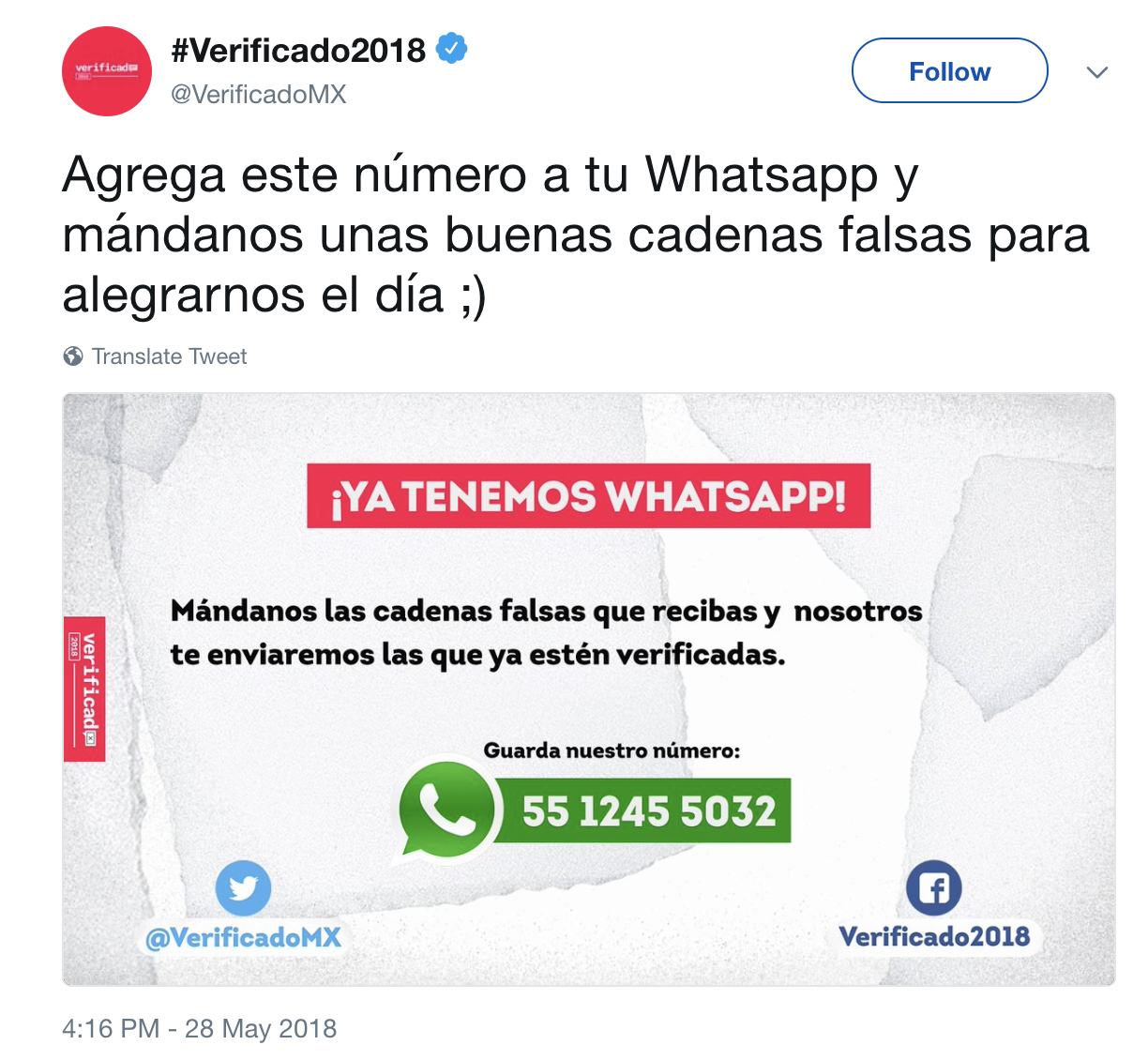 Verificado wanted to use WhatsApp from the beginning but waited to launch the account until the initiative gained some traction with the public because it didn’t want to spam people in their WhatsApp accounts.

“It’s not their Facebook or their Twitter,” Larrea said. “It’s their private messaging app where they talk to their mom or dad or husband or wife. It’s more of a private space. We wanted first to gain their trust to see what Verificado was about and then we launched the WhatsApp.”

•Know your stuff: Education has been a central tenet of Verificado. Verificado kicked off in March with a Pop-Up Newsroom workshop that trained journalists from around the country in digital verification and helped get them up to speed so they could be productive participants.

But Verificado is also committed to educating the public about how to verify content online, explaining what bots are and illustrating how the Mexican electoral process works. This has been among Verificado’s most popular coverage: An AJ+ Español-produced video on how to do a reverse image search from your phone generated more than 1 million views on Facebook. 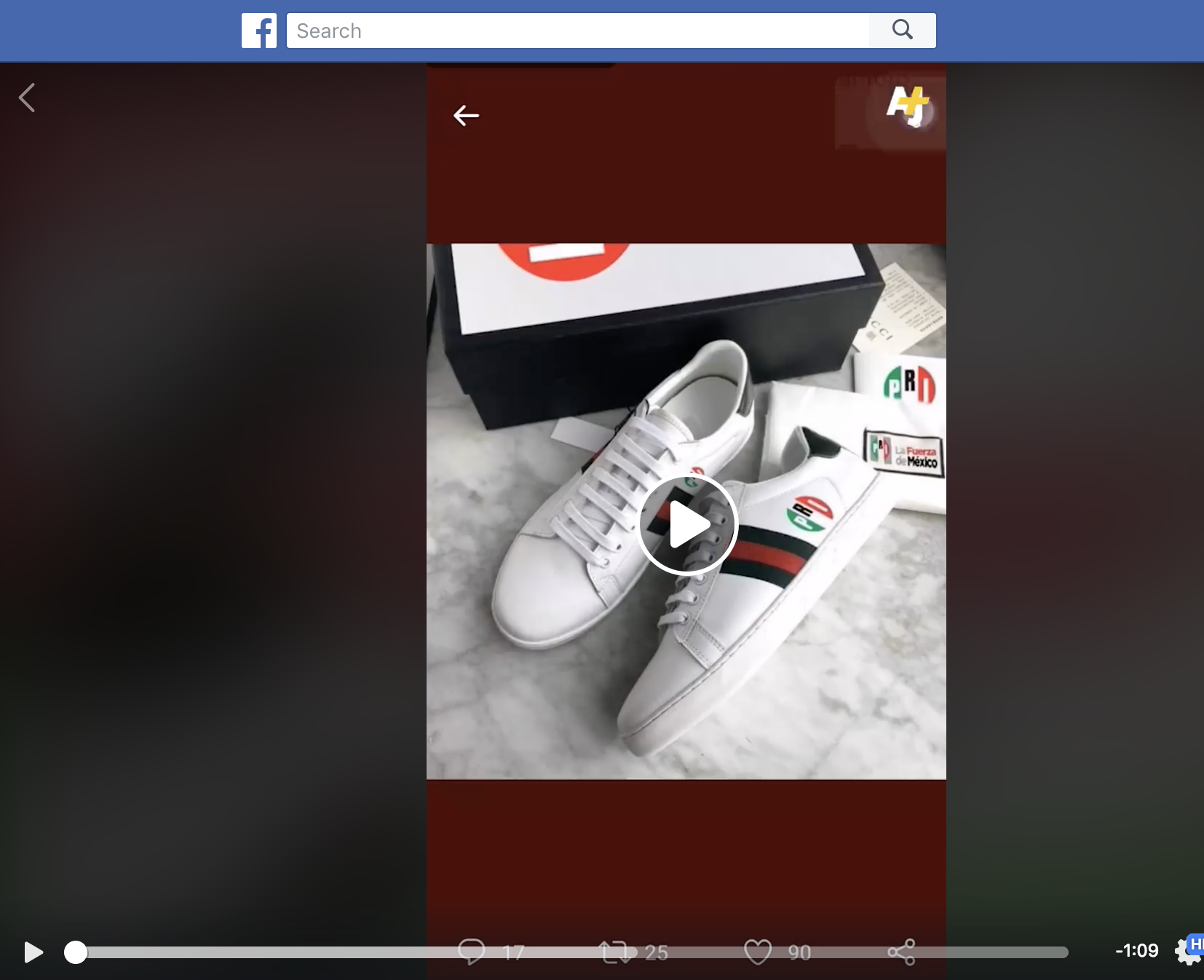 “And when a staffer on one of the presidential campaigns recently tweeted a photo of the candidate that she claimed was just taken, people were quickly able to figure out that the photo was actually from 2012,” Larrea said.

By producing these types of educational stories, Verificado is empowering its audience and enabling them to help with the reporting.

“That’s what we are hoping for at the end with Verificado,” she said. “We want to pinpoint the importance of verifying for media and for the audience.”

The Mexican elections are July 1, and the Verificado partnership will run in full force through the election, and likely continue after Election Day as votes are counted and results certified.

Another presidential debate is set for June 12, and Verificado will offer live fact-checks of the debate.

Ahead of the election, Pop-Up Newsroom plans to offer additional workshops for journalists and looking to get more students involved.

And on Election Day, Verificado will track voting issues throughout Mexico, leveraging its network of journalists from around the country.

“We have 90 allies, most of them will have reporters in the streets covering the election, and we can work with that. If there is a rumor that in your state it’s impossible to vote in the capital because there is a fire, with all our allies we can say that’s not true, here’s the video, here’s a picture and [we can] debunk that kind of rumor,” Montalvo said.

• Curious about how social media is weaponized in Mexico? Listen to this episode of the Reply All podcast from earlier this year. It will give you an overview of the types of challenges Verificado is dealing with.

• This BBC story is a great primer on the state of misinformation and the use of bots and trolls in the current Mexican election.

• For more details on Check, the tool created by Meedan for this type of work, read my story from Nieman Lab last year.

• And for more on Verificado 2018, here’s a terrific profile in the Los Angeles Times.

Do you know of any cool collaborations? Is your news org doing anything cool that you think would work for Solution Set? Send me an email, I’m at [email protected]

I’ll share some of the responses in next week’s edition.