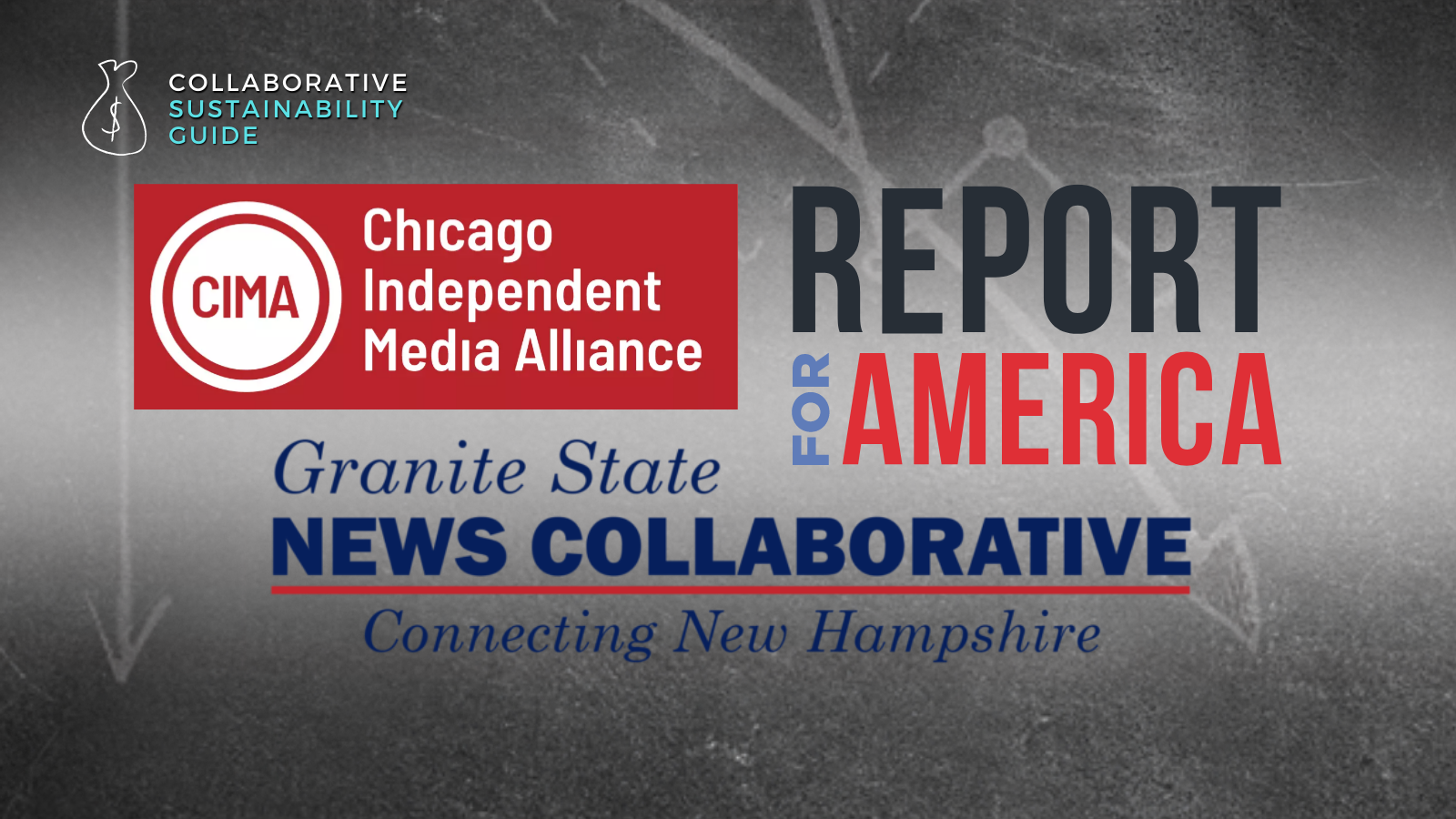 As news organizations have increasingly turned to collaboration over the past decade or so, philanthropic funding has emerged as the primary revenue source for collaborative projects.

While a core group of national journalism funders has driven support for much of this activity, publishers and collaboratives have worked hard to introduce collaborative journalism to new funders at both the local and national levels.

This guide is primarily focused on revenue streams beyond philanthropy. However, that doesn’t mean philanthropic funding for collaborations — and journalism more broadly — is going away. Philanthropy, from both institutional funders and individuals, can and should be part of a healthy revenue mix.

Within this section we’ve collected resources aimed at three key requests for guidance that we’ve heard from collaborative journalism leaders:

Ever consider running a joint fundraising campaign with other news outlets? Here’s how the Chicago Independent Media Alliance collaborated with more than 40 partners

CIMA is a collaboration of 69 independent Chicago media outlets representing more than 80 titles, led by the Reader Institute for Community Journalism, publishers of the Chicago Reader. (Some members publish more than one title.)

It was launched in 2019 to attempt to address the revenue challenges facing local publishers, and in spring 2020 — during the early weeks of the COVID-19 pandemic — it created an emergency joint fundraising campaign. CIMA encompasses publishers with an array of business models and tax statuses, and not all of them wanted to take part in the fundraiser.

For the 2021 campaign, the CIMA team organized a fundraising committee made up of participating members to help plan the campaign. They created shared marketing materials — featuring #SaveChicagoMedia — that the partners could use across their platforms. CIMA also provided peer-to-peer fundraising training to participants, having learned a lesson from 2020, when many members said they felt unprepared. The campaign was initially an emergency fundraiser created in a month, and some smaller outlets that signed up had never raised funds before.

The CIMA collaborative fundraiser was unique because donors could choose to donate to a particular organization, to give money to multiple outlets, or to have their donation divided among the participating outlets. During the 2021 campaign, two-thirds of donors chose to have their donations shared among all the partners. CIMA’s shared messaging focused on the value of independent local media and how outlets are serving communities across the city. It helped Chicagoans learn about the breadth and diversity of the city’s media.

Still, it could be challenging to balance the collective donations and the individual donations;  the matching funds provided by the funders supported only donations to individual outlets, so at times there were competing interests at play, even though CIMA capped the match amounts. One participant said in anonymous feedback shared with CIMA: “I haven’t found a good way to say, ‘Give to us and not to everyone else.’ I hope we can find a way to get matching funds without putting CIMA members against one another.” The CIMA team advised partner organizations to create an “echo chamber” on social media by shouting out other organizations to highlight the collective while encouraging the use of their own products — websites, newsletters, etc. — to try and strike the balance between promoting the individual and collective fundraisers.

CIMA built a shared website — SaveChicagoMedia.org  — to support donations. Each participating outlet also created a Stripe account, which was connected to its bank account, allowing donations to be transferred directly; for the 2021 campaign, outlets could view real-time reports on the fundraising.  Those reports helped publishers make decisions about how to frame their asks. The Crossroads Fund hosted all matching dollars and distributed those funds after the campaign ended.

• CIMA created detailed reports on its 2021 and 2020 campaigns;  both feature specific data points and details on how CIMA executed the campaigns and the key lessons it learned.

• For more on CIMA’s other activities, including creating a Chicago Media Directory and the launch of a FOIA project, which are featured in its 2021 Annual Report, click here.

• You can follow CIMA across social media at @IndieMediaChi.

The Granite State News Collaborative held a community event to engage new funders. This is how you can hold your own gathering

In May 2022, more than 50 journalists, funders and local leaders gathered in New Hampshire to discuss how local communities could come together to support local journalism that enhances civic engagement and provides trustworthy news and information.

“This is about recreating a piece of the fabric of democracy and community,” said Laura Simoes, executive director of the Nackey S. Loeb School of Communications, which co-sponsored the event with the Concord Monitor and the Granite State News Collaborative, according to a report on the event produced by the Collaborative. “We get to chart a new course and find fixes to problems that involve all of us.”

The gathering showcased successful local journalism initiatives that have benefited from philanthropic support, and featured a keynote address by Lauren McKown, senior vice president of development for the GroundTruth Project, Report for America’s parent organization.

Speakers emphasized that news organizations and collaborations should frame journalistic support as a way for foundations and donors to raise awareness and illustrate solutions for the challenges they’re trying to solve — from health and educational inequities to climate change and more.

For example, one of the key program areas of the New Hampshire Charitable Foundation is to promote community health. The foundation views local journalism as an important platform for promoting that mission to the broader community.

“It’s a natural extension of the way we work in [the] community. …  None of us has the scale to fix all these problems. Journalism is high leverage because it gives people information and understanding to act and act now,” said Katie Merrow, vice president of community impact at the foundation. “It’s relevant for any issue. It drives engagement, because people need information and a way into the issue to address it.”

She continued: ​​“To get everyone to rally around journalism? That’s still going to be a small subsector [of people] … It’s what journalism brings. I would skip over that word, [journalism,] and rally people around making sure you have the information you need about what’s going on in your community, and that your decision makers are hearing your voices.”

In many cases, funders appreciate the added scale and reach that collaborations can bring, ensuring that the journalism reaches as wide an audience as possible. Since 2019, the Granite State News Collaborative has raised more than $140,000 for its work, and many of its major funders have said that the group’s solutions-focused approach to coverage with partners around the state is a primary reason for their support. This can make a compelling case to funders interested in supporting local news.

• Here’s a full recording of the Summit.

Inside the Community News Fund movement

Peter Baniak, the editor and general manager of the Lexington Herald-Leader, and Lisa Adkins, president and CEO of Blue Grass Community Foundation, have known each other for years. So when Baniak first approached Adkins about support for a Report for America journalist, the conversations quickly evolved into a deeper partnership: The Bluegrass Civic Journalism Fund.

Housed at Blue Grass Community Foundation, the Fund has served not only as a fiscal sponsor for the Herald-Leader’s fundraising activities, but also as a catalyst for additional fundraising. It has connected the paper with groups, such as CivicLex, a nonprofit focused on civic engagement, to launch collaborative journalism projects.

Similar structures have popped up across the United States, as community foundations have partnered with local news leaders to create community news funds, centralized funds that attract donations from multiple sources to support local journalism on a permanent, ongoing basis.

In a report published in February 2022, Report for America identified at least seven communities that collectively raised $15 million using the model.

Community news funds involve a deeper partnership than a traditional funding relationship, and they often evolve to support collaborations or entire ecosystems. In addition to providing funds, the foundations leverage their civic connections to solicit additional donations and also support publishers by offering back-office support. They also work hand-in-hand with staff at the news organizations to build a philanthropic plan and help their communities understand the importance of supporting local news.

The RFA report outlined the following best practices for launching and growing a community news fund:

The highlighted case studies included a number of collaborative journalism projects, including a project in Lexington, Kentucky; statewide collaborations in California and Pennsylvania; and more.

Collaborative fundraising is just one solution

A blockbuster panel of local news leaders from North Carolina, New Mexico and New Hampshire came together at the 2021 News Philanthropy Summit, a global gathering of news fundraising professionals supported by the Lenfest News Philanthropy Network, to share key lessons from their experiences fundraising for collaborative reporting.

The Lenfest Institute’s Kyra Miller compiled some of the best practices, including:

Collaboration can transform and sustain a fragile media ecosystem. We are facing many challenges in journalism right now, including the erosion of confidence and trust in the news and the financial challenges of supporting a viable newsroom.

The guiding principle of the Local Media Project, led by Liza Gross, Solutions Journalism Network’s vice president of practice change and supported by the Knight Foundation, is to reinforce existing media ecosystems. Collaboration among existing news organizations can reinforce and strengthen the existing local media ecosystem during a period of great change and uncertainty.

“How do we create a collaboration that is representative of the community it serves, and can generate content that is equitable, diverse, and captures the complexities of that community?” said Gross.

Not every funder will be a good fit.

Not all funders are ready or willing to invest in news, and that is OK. In the long run, it is much better to create relationships with funders who are ready, willing and able to invest in you and see the true value of a collaborative journalism project.

“We make a big effort to stick to what we promise and be really specific about what we can do,” said Gross. “But we also want to make sure that when we expand our pool of funders, we remember that perhaps not every potential funder is suitable.”

What media outlets can do is work with funders of their collaborative to help craft each funder’s strategic plan. Gross spends a lot of time reaching out to funders to do this, while keeping in mind that outlets can still fundraise individually.

• You can watch a full recording of the News Philanthropy Summit session on collaborative fundraising.

• Check out the detailed recap for more lessons from around the country on collaborative fundraising best practices.