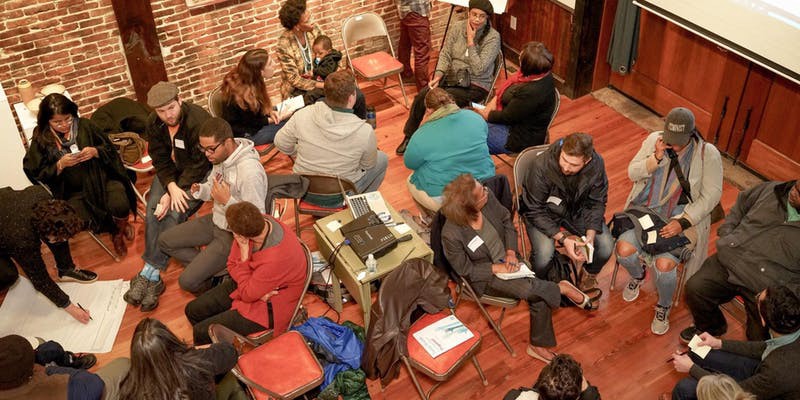 What can journalists learn from community organizers?

“Journalists do a lot of hand-wringing about what is or isn’t journalism or who is or isn’t a journalist,” Rispoli said. “That is completely missing the point. What we need to focus on is, ‘Do communities have the materials they need to stay engaged?’”

Free Press is an organization that advocates for media and internet freedom, and its News Voices work focuses on better connecting journalists and communities. The project launched in New Jersey in 2015 and expanded to North Carolina in 2017.

Organizing for Neighborhood News was supported by a $25,000 grant from the Lenfest Institute’s Philadelphia Ecosystem Collaboration Fund. The fund’s goal is to support a cohort of newsrooms and organizations in the Philadelphia area for closer collaboration.

Together, they aimed to enhance and evolve the relationship between journalists and the communities they serve.

The collaborators held workshops for journalists and community organizers, offering strategies on how to effectively and appropriately engage the public in the journalistic process. These meetings led to comprehensive coverage of areas in Philadelphia, such as Germantown and Kensington, which residents say are often are subject to stigmatized coverage.

From January through May 2019, Free Press provided continued mentoring and support to Germantown Info Hub and Kensington Voice as they implemented new outreach strategies in their communities. This work was rooted in finding ways that journalists can share power within the neighborhood they cover through the news process.

Both Germantown Info Hub and Kensington Voice have received additional funding through the new Independence Public Media Foundation and they plan to continue and expand their work. (The Lenfest Institute has also received support from IPM.)

Here’s what the publications learned from their participation in the Ecosystem Collaboration Fund, and how it will impact their work moving forward:

Germantown Info Hub: Building relationships “requires a lot of humility and a lot of patience.”

Andrea Wenzel is an assistant professor at the Klein School of Media and Communication at Temple University. She was also the lead of Germantown Info Hub during the grant period, which grew out of a research study in late 2017 that aimed to learn about people’s relationship with local media and their concerns with it. Now, Wenzel co-leads the Hub with Letrell Crittenden, program director of communication at Thomas Jefferson University.

As a result of that study, she brought together reporters and community members who were working on solutions-based journalism for a brainstorming session on the relationship between the community and local news, which eventually grew into the Germantown Info Hub.

Germantown is a historic neighborhood in north Philadelphia, which houses more than 41,000 residents. More than 75 percent of its residents are African-American. Many neighborhood residents feel as though the media only highlights negative things about their community, such as gun violence, and journalists fail to realize that neighborhoods like this are full of history, local businesses, community organizations and so much more, Wenzel said.

At the start of the Organizing for Neighborhood News collaboration, Wenzel worked with Free Press to train her team on effective community engagement strategies.

Germantown Info Hub already had a presence in their community at the time, but the trainings with the collaborators of this project gave an opportunity to rethink their current strategies and make changes about the locations they were using, the people they were connecting with and those that they weren’t.

Their outreach team connected with the neighborhood during weekly tabling sessions where they literally set up a table somewhere in the community with a Germantown Info Hub tablecloth.

People were asked not only what they would like to see covered by local media, but what specific issues and grievances they had with current media coverage. They also held a series of community discussions held at The People’s Education Center, a community center in the Germantown neighborhood.

More than 40 people attended this event and discussed doing things like starting community gardens and how they can work with the city to solve the issue.

Other community discussions focused on the future development of their recently shut-down high school and Germantown’s relationship with local universities.

“We learned things I would have never considered on my own without the help and expertise of community members,” Wenzel said. “Trying to deal with a topic as an outsider to the community, I might not understand why trash is such a loaded, politically messy issue in Germantown… it’s a process of trying to build relationships with communities [which] requires a lot of humility and a lot of patience.”

We learned things I would have never considered on my own without the help and expertise of community members.”

Following these discussions, Germantown Info Hub would share the findings on its Medium page and send out follow up emails to attendants.

At the heart of Germantown Info Hub’s community discussions is the idea that the journalists in attendance are not there to report or interview attendees for traditional stories. They are there to listen to the community and be as solutions-oriented as possible.

Their first priority is to instill trust in the community and make individuals feel truly heard and valued, rather than always being the subject of a story. The reports the Info Hub publishes on its Medium page are often just short blurbs about what happened in the event or sometimes they have published a short article on a topic as a way of promoting the event along with posting on their Twitter account.

“It’s not only about what happened in the room that day. Hopefully, there is a network of connections going on there,” Wenzel said.

Kensington Voice: “It’s really about meeting people where they’re at.”

Jillian Bauer-Reese, who is also a professor at the Klein School at Temple University, got involved in the Organizing for Neighborhood News Project through Wenzel.

“The idea was getting reporters in the neighborhood to rehash issues like the drug crisis” said Bauer-Reese.

Kensington is a neighborhood in northeast Philadelphia to which just under 23,000 people call home. It’s traditionally been known as an epicenter of the working-class, though as a result of deindustrialization population decreased.

To try and change the narrative, about a dozen Temple students spent four months running pop-up newsrooms and events including meet-and-greets with the community, storytelling workshops, photo exhibits and more.

The idea was getting reporters in the neighborhood to rehash issues like the drug crisis.”

The students talked with hundreds of residents on what they would want in a newsroom. In doing this, Bauer-Reese said they learned they had a lot more work to do on finding out what the community really needs out of local news.

Before the Organizing for Neighborhood News project, the team of student journalists were doing this work without knowing the full trajectory of Kensington Voice. At this time, that name didn’t even exist. It was simply a class of students at Temple, with no concrete plans for the future.

Bauer-Reese said this ended up actually benefiting them, as they were able to put some of the structural decision-making in the hands of the community members. The Kensington Voice team collected feedback from residents on things such logo creation and other branding elements.

The class was piloted into a prototype publication, launching at the time of the Organizing for Neighborhood News Project began earlier this year. Kensington Voice publishes online, though there is community interest in a print version, which the Voice is exploring.

One of the main activities of Kensington Voice during the project was the pop-up newsrooms.

The team would set up a table with a tablecloth and some chairs and set up surveys for community members to fill out plus some candy and snacks to catch some people’s attention.

“We were really just kind of winging it at first,” said Bauer Reese.

Initially, Bauer-Reese’s team was limited to a few subway stations and libraries around the community. Though, during a workshop with Germantown Info Hub, facilitated by Rispoli, a student journalist who grew up in Kensington came up with the idea to make the switch from subway stations to bus stops.

The team realized that meeting at subways was tough since most people were running up and down the stairs to catch their trains. At bus stops, it was much easier to engage with people and have more meaningful and focused discussions as they waited for their buses.

Now, Bauer-Reese says their communication with the community is much more targeted. They can tell people what they are working on and what they need from the community to adequately cover them.

During the grant period, Kensington Voice participated in various community workshops in collaboration with their partners in the project where they would teach community members how to write, take photos, and more.

“These served useful at giving community members something to do and help[ing] them amplify their voices,” said Bauer-Reese.

The Kensington Voice team also held public editorial meetings on a biweekly basis that were open to anyone who wanted to attend. This gave the community a really unique way to get involved in the most intimate part of newsmaking.

At these meetings, attendants would have the option of participating in the discussion, suggest a story idea or source or do their own thing and fill out a survey and join when or if they want to.

“It’s really about meeting people where they’re at,” said Bauer-Reese.

WHYY: Find the person in the newsroom who is willing to challenge norms.

In 2017, Jeanette Woods, who was then at WHYY, was a part of one of the first Lenfest-funded projects that focused on bringing cultural competence into the newsroom.

That project led her to meet Wenzel, who leads Germantown Info Hub. “She was amazing in helping us create a way to gather data on the experiment in diversifying our sources, Woods said.

Woods recently joined AIR Media, an organization that supports independent radio and multimedia journalists, as its story and talent curator. But while she was still with WHYY, she helped host multiple events and workshops during the grant period including journalism trainings on organizing tactics to strengthen relationships with community members, specialized training on audio equipment and an all-encompassing city-wide event that capped off the grant period.

As a legacy news organization, Woods said that WHYY’s role in the project was to provide a space, organize food and drink and get people there to listen.

In all of the work done by the collaborators, there was a decent amount of skepticism in the community about these initiatives.

“Any time you’re introducing new concepts to people they have questions and express skepticism,” said Rispoli. “Journalists by nature are skeptical. But the challenge with that prohibits thinking about new possibilities to do their work.”

On the community side, most skepticism comes from a history of mistrust in the media as a whole.

“That whole community has basically been traumatized,” said Bauer-Reese.

At the end of the day, all of the collaborators feel that the Organizing for Neighborhood News project will live on.

“It’s about finding that person in the newsroom that’s willing to challenge a little bit and figure out how to work with [someone] regardless of where they are in the news hierarchy,” Woods said. “It’s a revolutionary act.”