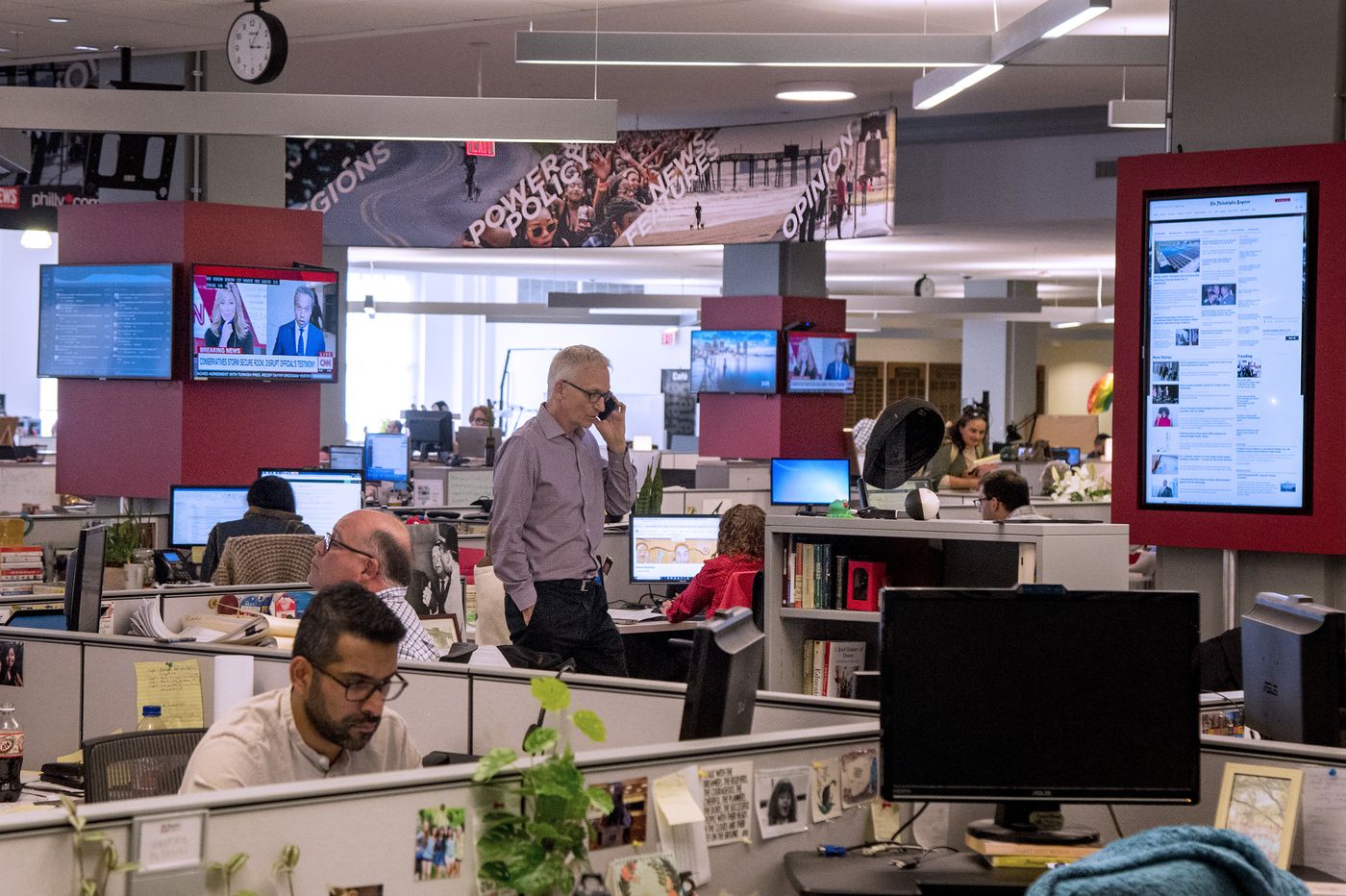 It has been a time of great change and impact for The Lenfest Institute for Journalism. Thanks to a groundswell of support, we have made substantial progress in our mission to save local news in Philadelphia and around the country. We are proud to share this report on our activities throughout 2018 and 2019 and to provide highlights of our work and partnerships.

In 2018, we lost our beloved founder, H.F. “Gerry” Lenfest, who passed away at the age of 88. Gerry once said, “Of all the work I’ve ever done, this is the most important.  There is nothing I can think of that is as important as keeping journalism alive in the city I love.”  It has been our honor to have worked with Gerry so closely and to continue our work to help realize his mission. With your support, the Institute is proud to carry on his legacy to ensure that strong local journalism lives on as a public benefit to our community.

Thank you for your partnership and support. We look forward to our continued work together.

About the Lenfest Institute

Created in 2016 by philanthropist H.F. “Gerry” Lenfest, The Lenfest Institute for Journalism is a unique non-profit organization whose sole mission is to build sustainable business models for local journalism. The Institute’s goal is to transform the news industry in the digital age to ensure that high-quality local journalism remains a cornerstone of our democracy.

Lenfest gifted to the Institute an initial endowment of $20 million and a subsequent $40 million challenge gift for investment in high-impact journalism, initiatives that serve diverse, growing audiences, and news technology and innovation. Lenfest also gifted his ownership of The Philadelphia Inquirer to the Institute. The Inquirer is now operated as a for-profit public benefit corporation, and it serves as a live lab for the Institute’s innovation efforts and a primary focus of its grant making. The Lenfest Institute for Journalism is part of The Philadelphia Foundation’s Special Assets Fund

The Lenfest Institute has invested substantially in the expansion of The Inquirer’s Philadelphia-based Investigative News Team and Spotlight PA, its investigative statehouse bureau in Harrisburg. The two efforts employ 22 people focused exclusively on investigative reporting, an increase from seven in 2016. The Inquirer “I-Team” is now among the largest investigative teams at any regional news organization in the United States.

Toxic City, a multi-year “I-Team” investigation into the ongoing struggle to protect Philadelphia’s children from environmental harm, was named a finalist for the Pulitzer Prize in Local Reporting. The reporting has resulted in major legal action, policy change, and both city and state commitments to fund school clean-up.

Leaders of the Glen Mills Schools hid a long history of violence against students, which was uncovered by Inquirer reporter Lisa Gartner. Her reporting resulted in swift and lasting change.

Collaboration is the foundation of high-impact work that the Institute supports across our city, region and state. The Lenfest Institute launched Spotlight PA, an investigative, non- partisan newsroom, which shares its content widely, for the benefit of every Pennsylvanian. Spotlight PA is powered by The Philadelphia Inquirer in partnership with the Pittsburgh Post- Gazette, PennLive/The Patriot-News, and PA Post.

Spotlight PA is the largest investigative newsroom in Pennsylvania dedicated to covering the state government and urgent statewide issues. Spotlight PA has already had major impact:

An investigation uncovered millions of dollars in hidden campaign spending by state lawmakers, igniting a new effort to strengthen oversight. In addition, Spotlight PA revealed that the Pennsylvania State Police had quietly stopped tracking the race of drivers who get pulled over, making it difficult to detect potential racial profiling. The story prompted the State Police to reverse course and resume collecting the data. Spotlight PA also broke the story of the state’s largest community college eliminating its campus mental health counseling for 17,000 students. The college has since announced it would partner with a firm to provide these services.

Broke in Philly is a collaboration between 24 newsrooms and academic partners providing coordinated and solutions-focused reporting on poverty and economic justice in Philadelphia, America’s poorest big city. The project’s goals are to provide rigorous reporting on economic mobility in Philadelphia, to examine the complex causes of economic insecurity and highlight effective approaches to its alleviation, and to elevate the voices of those with lived experience. Broke in Philly is a project of Resolve Philadelphia. The Lenfest Institute has been the lead financial supporter of its work.

To survive and thrive, local news enterprises must be nimble, tech-enabled, and committed to constant innovation. That’s why The Lenfest Institute has invested substantially in new technology within The Philadelphia Inquirer and throughout the local news industry.

The Lenfest Local Lab is the Institute’s new product development and innovation team. The Lab partners with The Inquirer on next-generation news products. The Lab created an interactive text-messaging news service that provided Pennsylvania and New Jersey voters with answers about candidates and issues. The Lab’s location-aware dining app, Philly Eats, provides award-winning Inquirer restaurant critic Craig LaBan’s reviews and dining advice to users based upon their physical location in the Philadelphia area.

The Lenfest Institute considers diversity, equity and inclusion a business imperative in all of our work. Diverse and inclusive newsrooms attract diverse and growing audiences. Our investments in newsroom diversity, community listening projects and multi-cultural news media address one of journalism’s biggest challenges, and one of its greatest opportunities.

Working with The Inquirer and partners across Philadelphia, we are focused on a holistic and integrated approach to addressing diversity challenges. In 2019, The Inquirer continues to transform its news operation, placing a strong focus on diverse voices, diverse backgrounds, and diverse news coverage that is representative of all of Philadelphia.

The Institute launched The Lenfest Fellows program in 2018, hiring six emerging, native-digital journalists of color for a two-year residency in The Inquirer newsroom. The Fellowship provides journalists with training and mentorship as they work on news desks throughout the newsroom. The program’s overarching goal is to hire, train and mentor early-career, talented journalists of color both for their benefit and that of the larger news enterprise and community served.

In April 2019, Lenfest Fellow Jesenia De Moya Correa helped launch El Inquirer, a Spanish- language section on The Inquirer’s website. She has reported and translated stories on everything from Mexican Day of the Dead festivities to immigrant families facing deportation.

“I learned that, in addition to more community-driven reporting, readers wanted to be able to understand these stories better by reading them in their native language,” De Moya Correa told the local news website Billy Penn, which recently profiled her work.

The Fellows have contributed meaningfully to news coverage at both The Inquirer and at partner news organizations including WHYY, WURD Radio, and NBC10.

In addition to their regular news beats, the Fellows created Made in Philly, a series of articles highlighting young Philadelphia residents working to address challenges in communities across the city. The Inquirer has published more than 20 Made in Philly stories spotlighting young changemakers and groups throughout the city such as mental health advocates, LGBTQ+ community leaders, and providers of services to young mothers.

Four of the six inaugural class of Lenfest Fellows have now joined The Inquirer in full-time jobs. Fellow Heather Khalifa won an Emmy Award for the production of her video and front-page feature story, Warrior Spirit, about a community’s response to gun violence.

Quality, in-depth reporting remains the fundamental value proposition between local organizations and their communities. The Lenfest Institute’s core mission is focused on supporting accountability journalism that makes a difference.

These deeply reported stories would not be possible without the support of individuals like you.

To learn how you can continue to support the Lenfest Institute, please click here.