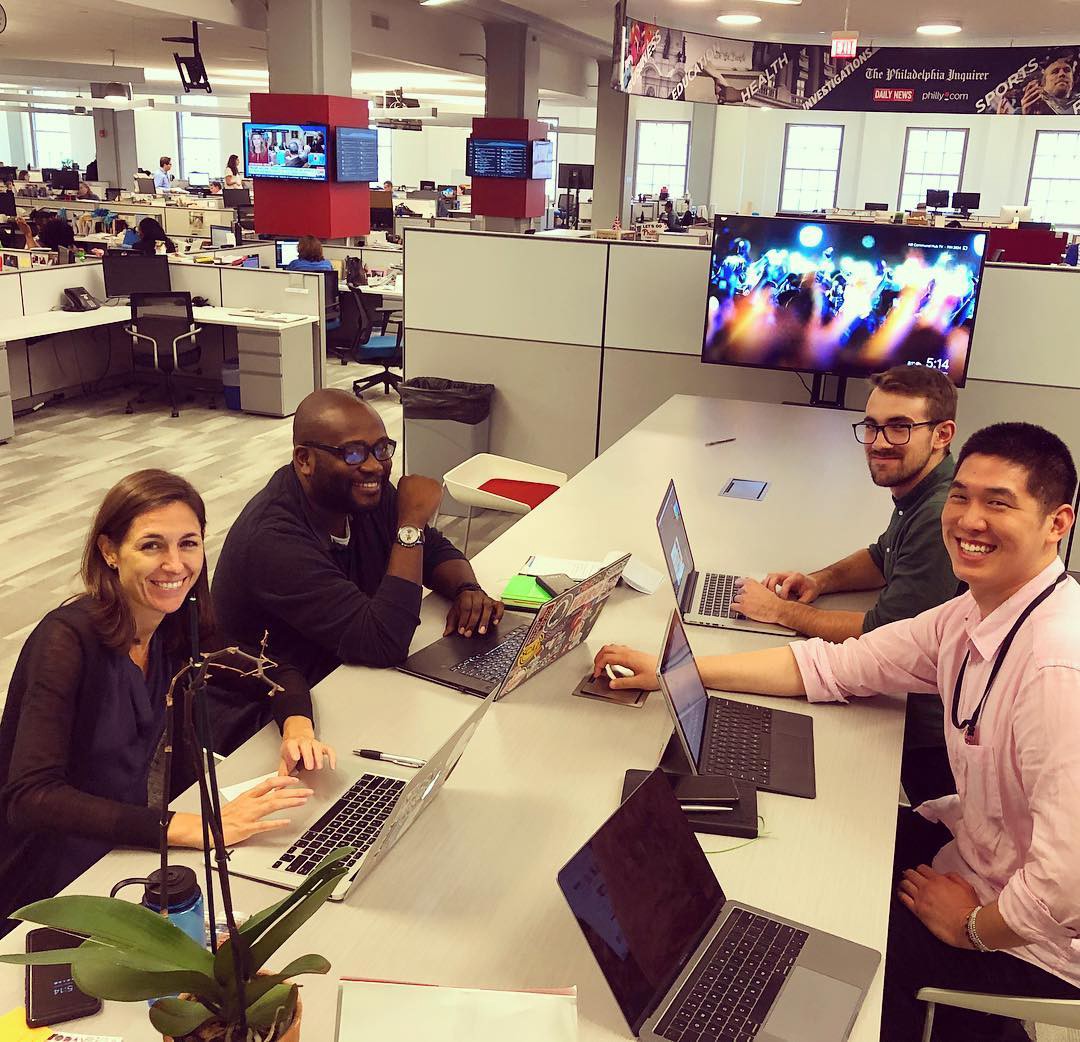 A glimpse into how much timing really mattered — and maybe shouldn’t need to — when it came to building an experimental local news product together.

There is at least one thing that news labs and newsrooms will probably always have in common: healthy respect for a deadline.

For the Lenfest Local Lab, the deadline for our first experiment coincided with the last day Pennsylvania residents could register to vote in November’s midterm elections. Nice news hook, we thought.

Just in time, the lab launched an SMS experiment with the Inquirer’s Innovation Desk intended to gradually and authoritatively inform people about key issues at play in the Pennsylvania and New Jersey elections. These text messages will deliver digestible, issues-based election news coverage and you can read more about it here.

However, the purpose of this post is to take you back in time and explain what was happening at the Lenfest Institute and The Philadelphia Inquirer in mid-August when planning for this experiment began.

How it all got started

At that point, The Inquirer’s plans were still coming together for their new Innovation Desk, tasked with testing new high-impact visual storytelling formats. Meanwhile, the newly formed Lenfest Lab was starting to recruit team members. Both of these innovation teams were being created at the same time and were interested in collaborating and amplifying the impact of one another’s work. So that gave us the chance to build connective tissue as both groups ramped up, rather than having to grapple with the headache of re-doing the plumbing of collaboration after pipes were already dug into the ground.

From a Lenfest Institute perspective, Burt Herman, the director of innovation projects, and I were thinking a lot about the type of team, culture and processes we needed to foster collaboration between our group and other local news product groups, including the Inquirer’s Innovation Desk. At the same time, the Inquirer wanted to talk about how our groups could be complementary, and how we might best take advantage of having two independent innovation groups embedded in the same city — the same newsroom even — for at least a year, which was the length of time the Lenfest Lab was initially given to experiment with new local news products.

It’s worth noting that the relationship between the Lenfest Institute for Journalism and the Philadelphia Media Network is unique. The Institute, whose ambitious mission is to “save local news,” owns PMN but doesn’t control it day-to-day. This setup was envisioned by the Institute’s founder, Gerry Lenfest, and it has laid a foundation of trust between the two organizations built primarily on the reality that each group’s success relies on the success of the other.

Why showing up (especially when invited) is important

With all that in place, I was invited to attend early midterm election planning meetings by the Inquirer’s Innovation Desk’s head and Managing Editor of Audience and Innovation, Kim Fox. She also asked me to keep in mind an idea pitched by Inquirer reporter Jonathan Lai about personalized election coverage via SMS.

I was glad to join the editorial meetings since I knew from experience in the Guardian Mobile Lab that chances of an experiment launching were greatly increased when pegged to a high-priority, deadline-driven newsroom project — and the midterms fit that bill. (At the Guardian our team launched experiments for impactful news events such as the EU Referendum (Brexit), the presidential primaries and also the Super Bowl. … Sorry Philadelphians reading this — not that Super Bowl.)

From a timing perspective, in August the midterms felt far enough away to give us time to refine an idea, but also near enough to feel like launching was an ambitious goal for our yet-to-be-formed team.

After a few meetings, it became clear that experimenting with SMS was right on the edge of what the newsroom could take on with their own resources, and that collaborating with the Lenfest Lab meant we could launch something new and all learn a lot from it. As Jonathan had already pointed out in his pitch, SMS held the promise of learning how to engage directly with readers and their questions. Texting also felt well-suited for breaking down complex information into regular updates that would help information sink in for people, or come into focus over time. It was like building a text-based lesson plan, but for local elections.

Armed with that idea, we started seeking out the right coverage to draw from for the experiment. We quickly realized the best content might not be easily derived from a typical article, and we were still unsure of how we could provide something useful to a broad range of people in the area. Could we offer hyperlocal information about races on a ward or district level? Probably not. Could we break down ballot questions for people? Not when there aren’t any statewide ballot questions in Pa. and only one in N.J. What else could we offer that would allow us to learn from testing out this format?

How to find out if there’s something worth trying

We were stumped, but we still had the presence of mind to make one important decision. Rather than launching an experiment guided only by our assumptions of what would make for a good midterms texting experience for people, we decided to ask real voters— what would be most useful to you?

The results from the survey — which was was posted on social media and in the Inquirer’s morning newsletter in early September — told us that readers were looking for coverage organized by issue (like education or healthcare), over coverage focused on a race or candidate. They primarily they wanted to know: based on the issues I care about most, who can I vote for that will represent my perspective in office?

Knowing what your audience finds useful is a huge motivator

This was a pivotal moment for us and the project. It was the first time we felt we were onto something and not just guessing. It still took a few more meetings with Jonathan; Holly Otterbein, an Inquirer political “Clout” reporter, Kim Fox and a few others for these issues-based text messages to really come into view.

What if these messages had mini news arcs of their own each week? Jonathan suggested. So for example:

We were hooked. This idea took perfect advantage of the “slow drip” opportunity of short daily text messages that can provide rich pieces of information, but also fit into a narrative that would help the texts take shape and hopefully increase voter confidence.

What it took to pull it all together

We zeroed in on the idea, and our collaboration with Jonathan and the Innovation Desk was finally cemented. We reached out to a journalism-focused SMS platform vendor, GroundSource, to find out what was feasible. We coordinated with the team building the Inquirer’s voter guide who had added a text message sign-up module into their design. We reached out to our analytics agency, Hero Digital, to scope what success would look like for this experiment and how we would measure it. We began thinking more deeply about what content we could adapt for messages and coordinated coverage with Inquirer Managing Editor Patrick Kerkstra. We also thought about what ad-hoc newsroom tools we needed to edit this new content.

That all happened last week, and this week we have an experimental product in the market. We look forward to sharing the results with you here later in November and welcome your feedback along the way.

The Lenfest Local Lab is a small, multidisciplinary product and user experience innovation team located in Philadelphia, PA supported by The Lenfest Institute for Journalism.

The Lenfest Institute for Journalism is a non-profit organization whose mission is to develop and support sustainable business models for great local journalism. The Institute was founded in 2016 by entrepreneur H.F. (Gerry) Lenfest with the goal of helping transform the news industry in the digital age to ensure high-quality local journalism remains a cornerstone of democracy.