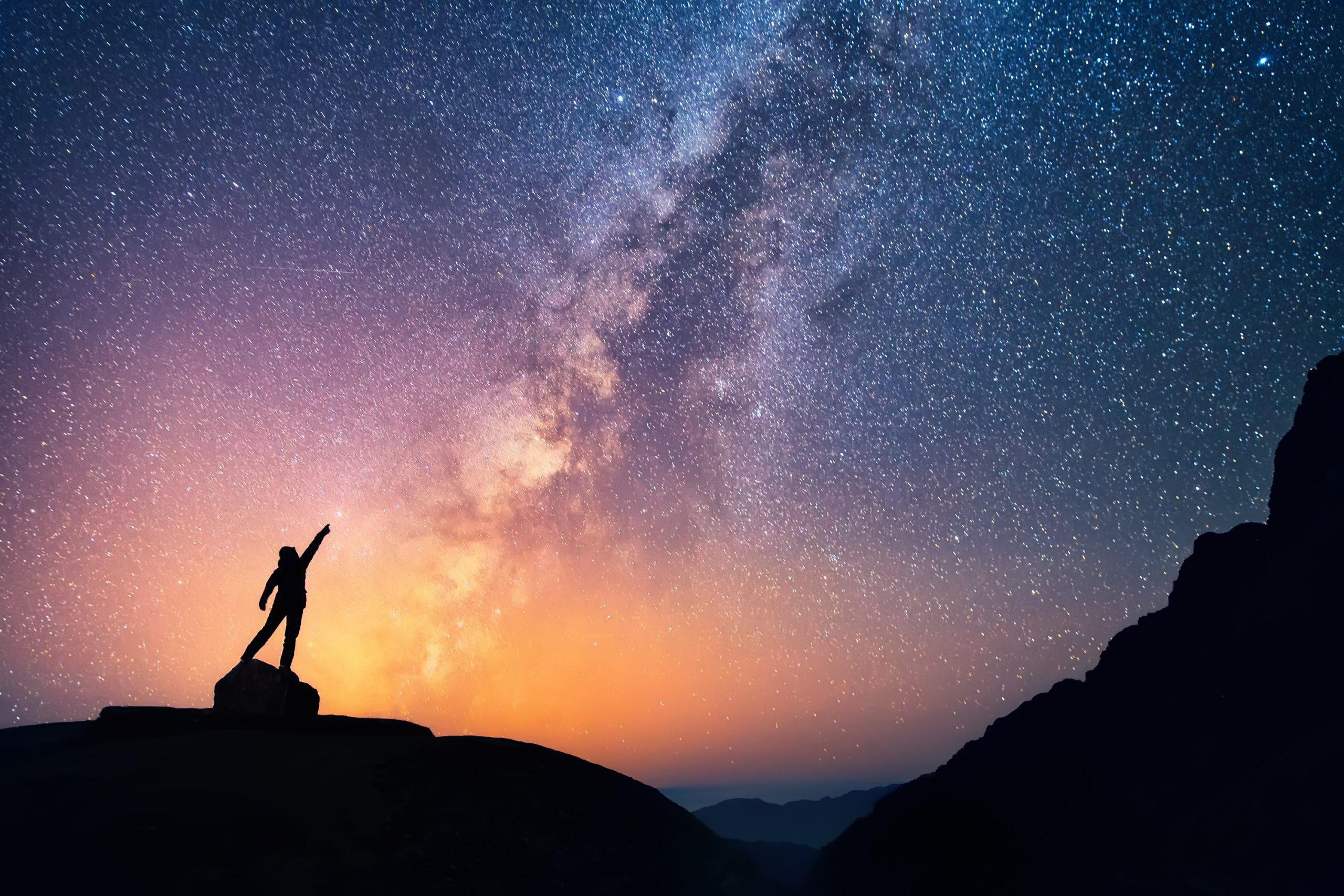 Applications are now open for fellows and executive advisors in the 2021-2022 Constellation News Leadership Initiative.

We created The Lenfest Constellation News Leadership Initiative last year as an experiment. The program, which I developed and led, was designed to provide career development support to mid-career media professionals of color.

The seven-month Constellation program included graduate school-level classes, one-on-one career coaching, and peer support. In December, at the halfway mark, I checked in with each of the fellows and executive advisors, who were mentoring the fellows. I wanted their feedback on the experience and to understand what they were learning from the program.

“I feel like I’m a part of something special,” one fellow said. “I’m gaining confidence, I no longer feel afraid,” another fellow said. “The biggest outcome of this experience so far is that I feel less anxious,” a third added.

At that moment, I realized that something unique was happening in the Constellation News Leadership Initiative. And the program produced results.

By the end of the fellowship last month, 40% of fellows reported a job promotion during the program and 90% reported an expansion of job responsibilities. Every fellow said the fellowship increased their confidence at work. And 70% of the fellows said the program helped raise their profile in the industry, while 90% said they made new connections with fellow journalists and media professionals.

We named this program Constellation because we believed in the brilliance these journalists and leaders of color possessed to light up our industry, our city, and our world. We also believed that if we could create a space where more of Philadelphia’s stars could connect, those connections would help each of us shine brighter than we ever could alone. That promise was realized in this first Constellation cohort, and this group proved to be a beacon of light for our industry during a dark time.

Over the course of the fellowship, the 10 mid-career media makers of color in the Greater Philadelphia area received world-class training from the Craig Newmark Graduate School of Journalism at CUNY, mentorship from executive advisors who have advanced to positions of leadership in news enterprises, and career coaching from Crawford Leadership Strategies, a Black-owned leadership development firm.

This program was made possible in part due to the generous contributions of the Independence Public Media Foundation and The M&T Charitable Foundation.

When we designed the initiative, our desired outcome was for half of fellows who completed the program to advance to new jobs or have an expansion of role responsibilities within three years of completing the program. Other outcomes we hoped for included:

The program surpassed our wildest expectations, and you can learn more below about what the fellows’ accomplished. Each fellow also wrote an essay sharing their experience and their vision for the future of Philadelphia journalism.

We’re beyond proud of these incredible journalists and media makers, and we can’t wait to see what they achieve next.

Read more below to learn about our incredible fellows and executive advisors, along with links to essays each of the fellows wrote about their experiences in Constellation:

Professional Accomplishments: Ray led The Philadelphia Inquirer’s Election Roundtable effort and he is currently working on ways to expand direct community engagement into other areas of The Inquirer’s  work. Ray takes great pride in the tone of The Inquirer’s social media channels, particularly Instagram where they’ve really pivoted to helping followers by providing resources on voting and COVID-19. He also leads a project called Behind the Story, a social video series where The Inquirer goes behind the scenes with journalists in an effort to lift the veil on their work and humanize the brand to build trust with audiences. In addition, Ray serves as an alumni mentor in Temple University Klein College of Media and Communication’s Alumni mentorship program and became a director at large for the school’s alumni board this past summer.

Professional Achievements: Johann joined Chalkbeat in September as its first Philadelphia bureau chief as the site was transitioning The Philadelphia Public School Notebook to Chalkbeat Philadelphia. He expanded Chalkbeat’s visibility with readers and media partners through its first virtual event “Reporting on a Pandemic” in November 2020, which led to nearly 50 new newsletter subscribers in just one hour.

Professional Achievements: Since her second month at The Inquirer, Heather has coordinated digital production of coronavirus coverage.  She’s expanding her focus to audience development and data analytics, as well. She also works to support professional development and a sense of community with the Asian American Journalists Association, through her work as vice president of the New York chapter and co-director of the AAJA Freelance group. Heather is also dabbling more in audio storytelling with the launch of a second season of Local Switchboard NYC, a hyperlocal women-led audio collective that she co-founded, Heather also soft-launched What’s Up In Asian America as a hub for events by and for the AAPI community. In her spare time, Heather is working to relearn Cantonese and practice her singing and acting muscles.

Professional Achievements: Jesenia is a pioneer as the first Philadelphia Inquirer communities reporter dedicated to Latinx populations in the Greater Philadelphia area. With her engagement efforts, she worked on rebuilding trust in Latinx communities and other marginalized groups, which have been harmed by previous Inquirer reporting. She is the founder of El Inquirer, a Spanish-language news product tailored to Latinx groups, which provides quality, fact-based journalism in Spanish and makes The Inquirer’s journalism more accessible to the population. Jesenia has found the guidance and support of journalists of color in the local industry, who have helped her boost her confidence, along with advisors and leadership coaches who have built on her strengths, guided her to managing her time and energy better, and helped her improve her relationship with her editors. Most recently, Jesenia was nominated by the public for Al Día News Media’s Women of Merit awards in the category for Public Service.

Essay: Local journalism is about belonging

Professional Achievements: Aaron was awarded a 2021 Visiting Nieman Fellowship at Harvard University and was selected as a 2021 fellow for the New Leaders Council a fellowship develops, connects, and uplifts inclusive, cross-sector leaders who transform our country through social and political change rooted in equity. . In addition to his role as The Tribune’s digital coordinator and video producer, Aaron  was recently named the newspaper’s  business and sports editor.

Professional Accomplishments: Donnell is continuing his work to enhance the growth of FOX 29’s  supporting his team in the production and planning of all newscasts and long-term specials. He is passionate about developing the next generation of TV journalists and supporting their career goals. As an Emmy-nominated executive producer, Donnell remains dedicated to his professional development and growth as a leader of people and manager of winning TV news coverage.

Professional Accomplishments: Yvette’s biggest wins have been in building her confidence, understanding her value, setting goals, and gaining access to some of the top editors in the industry who are showing her what strong leadership looks like. They’ve helped guide her thinking, speech, and decision-making as she navigates challenges in her own newsroom. Other wins include: creating, planning, and executing new ideas; mapping out a business plan; and enhancing her grasp of audiences and metrics, product and revenue and the relationships between them — information that has altered how Yvette views and does her job, and has made her think about new ways to deliver The Inquirer’s journalism.

Professional Accomplishments: During these unprecedented times, Karla realized she has many gains to tout. Showing up for herself is a feat on its own. Throughout the pandemic, The Inquirer has made changes throughout the newsroom, and specifically with the digital teams. Conversations around her role and her future were overwhelming Karla. Her executive advisor, Emma Carew-Grovum started helping her work through that anxiety by introducing her to other women who charted awesome paths in their newsrooms that did not fit the traditional reporter/editor trajectory. Karla has become  more comfortable advocating for herself during these changes.

Professional Accomplishments: In addition to her work with stakeholders in The Inquirer’s marketing department to drive subscriptions and revenue, Nadya’s responsibilities have recently expanded to include The Inquirer’s ad sales team. The team has added PayPal as a payment option to help streamline the checkout process, and they’ve also completed behind-the-scenes work to optimize workflows for marketing campaigns. Nadya collaborates with multiple business units to meet company goals, and she continues to work closely with engineering and design teams to execute from ideation to implementation. Most recently, Nadya worked on a project to require registrations to access The Inquirer’s e NCAA March Madness bracket and also on integrating a subscriber-only experience to The Inquirer’s Phillies season preview coverage online.

Professional Achievements: Daisy oversees PhillyGuide, New Mainstream Press’ the digital platform, which provides local news for the Chinese community. Since March 2020, PhillyGuide has published  “COVID-19 EVERYDAY UPDATES,” which have provided up-to-date news and information about how community members can navigate the challenges of the pandemic. The team has translated and published thousands of pieces of local COVID-19 news in the past year.